‘Worst is behind us’ but recovery will be slow – Bundesbank economist 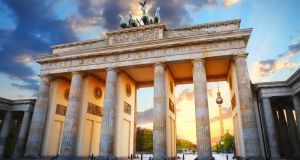 “The worst is behind us” on Covid-19 but the economic recovery will be gradual, the chief economist of the German Central Bank said. Photograph: iStock

“The worst is behind us” on Covid-19 disruption but the economic recovery will be gradual, the chief economist of the German Central Bank said on Thursday.

Speaking on a webinar organised by the German-Irish Chamber of Commerce, Deutsche Bundesbank chief economist Jens Ulbrich noted that the German economy “won’t return to pre-corona levels of activity any time soon”.

“The speed with which the German economy was sliding into recession was unprecedented,” he said, noting that employees’ expectations on income are in “freefall”.

Some 50 per cent of German households expect income losses over the coming 12 months, he told a Dublin audience, while one-third are certain they will suffer losses amounting to about €600 per month.

“We are well advised that private consumption will not return to pre-crisis levels very rapidly,” Mr Ulbrich said.

Speaking at the same conference, Mark Cassidy, the chief economist at the Central Bank of Ireland, noted that the “severity and sharpness of this pandemic” is without precedent.

However, he said the Republic’s debt level is sustainable, reflecting the Central Bank’s forecast for a return to strong economic growth though he added: . “We think more fiscal stimulus will be required in the short term at least.”

The affect of Brexit was also discussed on the webinar, with Mr Ulbrich noting that Germany’s reliance on the UK as an export partner has been declining since the Brexit vote.

“A lot of the reshuffling of supply chains has already taken place,” he said.

Last week, the Central Bank warned that it would take until 2022 for the economy to rebound from the coronavirus pandemic. And that is provided there is a gradual reopening of the economy this year and no resurgence of the virus.

A second outbreak, however, would result in a more severe economic slump, with output and unemployment not returning to their normal pre-Covid trajectories until 2024, the Central Bank said.