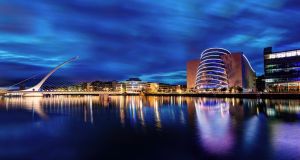 The IMF was broadly positive about the Republic’s economic position. However, it backed up suggestions from the Irish Fiscal Advisory Council to ensure that the economy had sufficient buffers. Photograph: iStock

The Government should provide support to hard-hit sectors in the event of a no-deal Brexit, but otherwise let the economy operate freely to support itself, the International Monetary Fund (IMF) has said.

Following its annual consultations with member countries, the fund acknowledged that Ireland was “uniquely vulnerable to a no-deal Brexit”. If the risk associated with a no-deal were to materialise, it said the Government should let “automatic fiscal stabilisers operate freely” and provide targeted support to troubled sectors, likely to include businesses in the agri-food sector.

However, it added the caveat that a fiscal stimulus may be called for “depending on the severity of the downturn in the broader economy”.

In the case of a sharp credit contraction, the IMF suggested that the countercyclical capital buffer could be released, meaning banks wouldn’t have to hold as much capital as they currently do.

“Directors emphasised the need for continued engagement in international cooperation. Close co-operation with the EU and the UK should continue to avoid cliff-edge risks related to Brexit,” the IMF’s report said.

“While healthy economic growth continues, it is clear that there are significant challenges ahead,” said Minister for Finance Paschal Donohoe.

“With these risks in mind, the Government will continue to implement prudent budgetary policy, building resilience against external shocks, while avoiding domestic overheating of the economy.”

Commentators have suggested the risk of a no-deal Brexit has risen following the demise of Theresa May’s premiership and the possibility that Boris Johnson will replace her.

Such a risk could cause serious repercussions for Irish economic growth, the Central Bank previously suggested. The regulator forecast growth of 1.5 per cent would be witnessed this year in the event of a no-deal. In the normal run of events it expects growth to be about 4 per cent this year.

In April, the bank did, however, warn that its no-deal forecasts may underestimate the full impact of Brexit on the Irish economy as it represents such an “unprecedented” shift in trading relations.

Such an view was recently echoed by the State’s fiscal watchdog, the Irish Fiscal Advisory Council (IFAC), which said the outlook was “unusually uncertain” as a result of Brexit.

It added that a disorderly Brexit posed “profound risks to the public finances”, and the shock to the economy could result in the Republic’s debt ratio rising. In a disorderly Brexit, the Government may need to cut spending or raise taxes, it also said.

The IMF was broadly positive about the Republic’s economic position. However, it backed up suggestions from IFAC to ensure that the economy had sufficient buffers.

“Reforming the income tax and cancelling the USC appears to be potentially beneficial, especially to reduce the administrative burden and align work incentives,” the fund said.

“A reform should, however, preserve the overall income tax progressivity and tax yield, which could be achieved by a broader tax base, more tax bands and higher tax rates.”

It also saw the need to boost productivity in domestic companies by funding innovation, employee-training programmes and infrastructure investments. The State should also continue to increase female employment, “notably through the affordable child care programme”.

1 Dracula scenario for Irish economy: second outbreak and no-deal Brexit
2 Ireland faces 'deep downturn' this year and may not rebound until 2024 if there is a second wave
3 Why the Fed thinks Goldman is America’s riskiest bank
4 Why are markets booming when a crash is on the way?
5 ‘The rental situation stops me moving back home’
6 Major works at Rosslare Europort after €30m investment from Irish Rail
7 How much do Irish people earn? And what will Covid-19 do to our wages?
8 Why UK supermarkets are not making super profits
9 Dublin consultancy Pathfinder set for expansion after buyout by Sia Partners
10 John FitzGerald: Civil Service expertise key to Government policy
Real news has value SUBSCRIBE