We’re awash with cash again – so why aren’t we spending it?

Cantillon: Household income is rising, but consumers are cautious with the purse strings 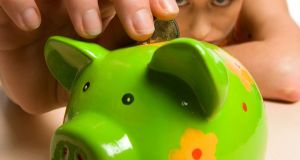 Total household savings – some being used to pay down debt – continue to rise. Photograph: Getty Images

Crawling from the wreckage of the economic collapse has taken time, but a number of recent indicators – including, crucially, employment – are now back at, or near, pre-crash levels. Another landmark has also been reached, according to Central Statistics Office figures published during the week, which showed the total disposable income of all Irish households touching a record €100 billion last year, just above the pre-crisis peak and more than 5 per cent up on one year earlier.

A rise of 5 per cent is a decent increase, so why is the feelgood factor not entirely apparent? In an analysis of the figures, Simon Barry, Ulster Bank chief economist, points out that because the population has continued to rise – both during the downturn and the recovery – average income per household has yet to return to pre-crisis levels.

“Average household income has shown a very welcome 10 per cent rise from its 2011 crisis low,” Barry writes, “but at €56,000 remains about 8 per cent shy of its 2008 peak (of close to €61,000), helping to explain why for many households the economic recovery has lacked a major feelgood factor, despite the return to peak in a number of macroeconomic metrics.”

A few key trends are driving disposable incomes higher. These include rising employment and a recent recovery in wage growth – which was relatively static in the early years of the upturn. With the recent Central Bank forecast suggesting that earnings growth is now set to accelerate as the labour market tightens, there should be solid underpinning for the expected rise in consumer spending this year.

There are still signs of consumer caution. Households’ gross income rose by 5.3 per cent last year, but spending on goods and services rose by just 3.2 per cent. So total household savings – some being used to pay down debt – continue to rise. The Celtic Tiger boom was built on debt, while – so far anyway – the recovery is built on more solid foundations.

Consumers should start to feel the benefits more clearly if the recovery continues, particularly as general consumer price inflation remains low. However, Ireland still remains an expensive place to live, and in some areas – such as the rental market and house prices – inflation is taking a serious toll.