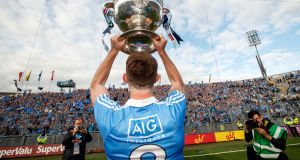 Dublin’s Brian Fenton celebrates in front of Hill 16 last year. Even the suggestion of flogging the naming rights to historic Croke Park is sacrilege for many. Photograph: James Crombie/Inpho

The pleasure of slapping their brand on the venue still fondly known as “the Point” by a certain generation hasn’t come cheap for Three Ireland, but might its €55 million 10-year extension deal have focused a few minds at GAA HQ?

After all, if entertainment giant Live Nation can get €55 million off Three for the naming rights to a 13,000-seater concert venue, the chances are that, in a time of market inflation, Croke Park could command a figure closer to €100 million.

The Irish sponsorship market is enjoying a growth spurt, but it’s the top end, where there are a relatively low number of available properties, that is truly riding the wave.

Three’s new deal marked a sharp increase on the value paid for the arena rights in 2008 by O2 Ireland (which Three later acquired), while Aviva Ireland’s recent five-year extension to its naming of the Lansdowne Road stadium is thought to have cost the insurer somewhat more than the €4 million-a-year sum implied by its previous 10-year, €40 million agreement. These two naming rights deals are understood to be the two biggest sponsorships in Ireland.

While the naming rights to Páirc Uí Chaoimh in Cork, the Gaelic Grounds in Limerick and Tipperary’s Semple Stadium are hovering near much more modest shop windows, even the suggestion of flogging the naming rights to historic Croke Park is sacrilege for many. Páraic Duffy, who was director-general of the GAA until February, “could never see that happening – ever”.

But sometimes it is hard to know where the GAA’s commercialism ends and its famous ethos begins. There is certainly no shortage of sponsors keen to link their brands to its highest-profile events (although upheaval at Eir makes the telco less than certain to continue as one of the three main sponsors of the all-Ireland football championships). For an international corporate behemoth with deep pockets and a world to dominate, Croke Park would be perfect.

Perhaps it is only a matter of time before the thought of all that grassroots-bound cash – northwards of €6 million a year, at least – from a naming rights deal proves too eye-watering to ignore.

Realistically, however, Croke Park cannot stop being Croke Park overnight. Anyone for the Amazon Croke Park?