Clearly, some people want to move on from Brexit already

Cantillon: As talks head into another crunch period, any suggestion of no deal could affect investment 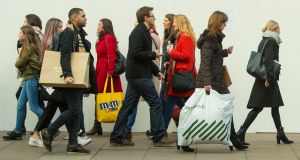 Shoppers on Oxford Street, London: “The UK economy has kept chugging along, even if weak sterling and higher inflation cut consumer spending last year and meant GDP growth, at 1.7 per cent, was the slowest among major economies.”

While interpreting UK economic data, it is best to remember one thing. Brexit has not happened yet. Pretty much everyone had expected a significant hit to confidence and thus growth after the UK voted to leave the EU. But the UK economy has kept chugging along, even if weak sterling and higher inflation cut consumer spending last year and meant GDP growth, at 1.7 per cent, was the slowest among major economies.

The latest figures suggest a further slowdown in the first quarter of the year, though the weather, rather than Brexit, is being blamed. Manufacturing output fell 0.2 per cent in February compared to the previous month. Construction output also declined in February, falling 1.6 per cent after a big drop in January. UK GDP growth forecasts for the first quarter are now being trimmed from 0.4 per cent to 0.3 per cent or even 0.2 per cent, though manufacturers say that as the Beast from the East snowstorm was to blame, output may bounce back.

Against this backdrop, the Bank of England is still expected to increase interest rates again next month, following on from the quarter point rise in base rates to 0.5 per cent last November, the first increase in a decade. But the February warning from the central bank that the pace of increases could be faster than earlier anticipated will be questioned if the weak run of data continues.

And hanging over this is the uncertainty of Brexit. As the talks head into another crunch period in May ahead of the June EU summit, any suggestion of a no-deal Brexit could affect confidence and investment, particularly as it would scupper hopes of a transition period lasting until December 2020.

Whatever about the shape of the UK’s exit, Eurostat, the EU statistical agency, is starting to prepare. Its main economic aggregates for the EU – for GDP growth, unemployment and the like – are now being published with all 28 current members counted in, and also in a separate series, with the UK excluded.

This, Eurostat says, is a response to “strong demand for such data from institutional users as well as the general public”. Clearly, some people want to move on already. If only removing the UK from the EU was as easy as subtracting it from statistical data.