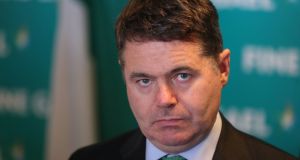 Almost two-thirds of voters have said they would be willing to forgo budget tax cuts at a time of rising fears over the economic cost of a no-deal Brexit. According to the latest Sunday Business Post/Red C opinion poll, just 39 per cent said they wanted tax cuts and/or social welfare increases that benefit them personally. Instead, 61 per cent said they would prefer the Minister for Finance Paschal Donohoe to invest more in public services in next month’s budget, at a time of public housing shortages and long health service waiting lists.

Mr Donohoe will pay a full Christmas social welfare bonus this year, but will not repeat last year’s €5 increase in the pension, dole and carer’s allowance in the forthcoming no-deal Brexit budget, the Sunday Times states.

The same paper reports that Brexit will lead to the departure of 16 insurance companies operating from Britain and Gibraltar that write almost €1 billion of premiums a year in the Irish market, according to the Central Bank of Ireland.

“The Brexit exodus comes amid mounting concerns that a loss of capacity in key areas such as public liability cover is making some businesses uninsurable.”

Cairn Homes could sell thousands of additional apartments to institutional investors for use in the private rental market, rather than making them available to individual homebuyers, the Sunday Business Post reports.

The listed housebuilder has identified nine planned apartment developments and another which is under construction as potential private rental sector “opportunities”, having already completed two such deals in the past 15 months.

The paper also has a story on how Wetherspoon is willing to open up to 30 pubs in Ireland if it can find suitable acquisitions. It quotes the chain’s founder, Tim Martin, saying: “If things go well here, we might have 20 or 30 pubs here in 10 or 15 years.”

The group is spending €2.5 million on a new pub on Waterford’s Broad Street and has acquired the former Carbon nightclub venue in Galway for a similar sum. It is also putting €4 million behind a super pub and 98-bedroom hotel on Dublin’s Camden Street.

Staying with the world of entertainment, bar and nightclub owner Colin Dolan is leading the bid to acquire Dublin’s Copper Face Jack’s pub, the Sunday Independent reports. Dolan, a nephew of the late showband singer Joe Dolan, is being backed by Alan McIntosh’s Emerald Investment Partners. He runs Cassidy’s pubs in Dublin among others.

The chairman of property group Green Reit, which is in the process of a sale for €1.34 billion to Henderson Park, is to be paid an extra €10,000 for each month in which he spends up to six hours working on the deal, according to a story in the Sunday Times.

Gary Kennedy and three independent non-executive directors of Green Reit are receiving extra fees for work on the process. Green Reit said the payments were in recognition of “significant additional duties” relating to the sale.

Finally, the rollout of high-speed broadband to rural Ireland has been further delayed, Minister for Communications Richard Bruton has confirmed, according to the Sunday Independent. It says the plan was to have the final contract with Granahan McCourt consortium agreed in time for an announcement at this week’s National Ploughing Championships. However, this will not now happen.