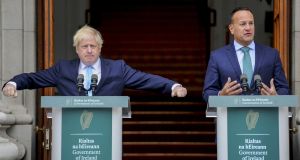 British prime minister Boris Johnson said on Tuesday that a no-deal exit would be a ‘failure of statecraft’. Photograph: Aidan Crawley/Bloomberg

Irish consumer confidence has tumbled to its weakest level since November 2013 as Brexit concerns cloud the outlook for the economy, a survey from KBC Bank has found.

Fears over a cliff-edge Brexit have heightened concerns over job losses in the Republic which, in turn, has driven a dip in confidence. KBC’s consumer sentiment index dropped to 77.2 in August, down from 85.5 in July and 102.4 a year ago. The August reading marks the second largest monthly fall since December 2012.

“It seems that Irish consumers are now preparing for the worst and no longer allowing themselves hope for the best in relation to Brexit,” said KBC Bank Ireland chief economist Austin Hughes.

“It seems we are seeing a stepped and staggered deterioration in Irish consumer confidence as a full realisation of the scale of problems posed by Brexit comes into sharper focus.”

While the weakening of sentiment is broadly similar to that seen around the Brexit referendum in 2016, Mr Hughes notes that August was a “wicked month” for consumer confidence across a range of developed economies including the US.

Irish consumers were most concerned about the prospect of unemployment rising, with about 50 per cent expecting that metric to increase. Minister for Finance Paschal Donohoe recently said 80,000 jobs might be at risk in a hard Brexit.

Whether that scenario is likely remains unclear with British prime minister Boris Johnson saying on Monday that a no-deal departure would be a “failure of statecraft”. However, he said it was essential Britain left the EU by the deadline of October 31st.

The lack of clarity over the likely outcome pushed sentiment toward the general economic outlook lower in August with just over half of those surveyed expecting the economy to deteriorate over the coming year.

The gloomy forecasts also appear likely to dampen household spending with one in four consumer expecting their financial situation to worsen in the coming 12-month period.

Mr Hughes said these elements suggest that “a cautious approach to household spending rather than cutbacks is likely to continue until Brexit is resolved”.