Tax relief will not extend to GAA players

Minister says scheme for sportspeople cost the State €2.4m over the decade to 2017 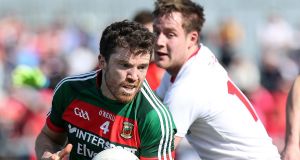 The scheme allows tax relief to be claimed on earnings which derive directly from participation in the sport concerned but not earnings such as sponsorship fees and income from advertisements or endorsements. Photograph: ©INPHO/Presseye/Matt Mackey

Extending a tax relief scheme for sportspeople here to GAA players “would raise a number of issues and challenges”, Minister for Finance Paschal Donohoe has said.

“Given the amateur status of the players, income from sources not related to the playing of Gaelic games might need to be taken into account,” the Minister said. “This would have implications for the tax system that would need to be carefully examined.

“In addition, equity issues might arise as regards the equal treatment of players from both within and outside the jurisdiction.”

His comments came in a written reply for a question from Fianna Fáil TD Marc Mac Sharry.

Mr Donohoe said the current tax relief scheme for sportspeople cost the State €2.4 million over the decade to 2017. During that period, 323 sportspeople claimed tax relief.

The scheme allows sportspeople claim tax relief on earnings which derive directly from participation in the sport concerned, such as prize money and performance fees, but not other earnings such as sponsorship fees and income from advertisements or endorsements.

Those to avail of the scheme include rugby players, golfers, jockeys, cyclists, swimmers, boxers and athletes.

Mr Mac Sharry had asked whether the Minister had considered extending the scheme to GAA players.

Speaking after the Minister’s reply, Mr Mac Sharry said: “I would not necessarily be in favour of the inclusion of Gaelic games participants in the tax relief scheme as it blurs the lines of the amateur ethos which we all support within Gaelic games.

However, he said that “adequate supports need to be put in place for participants in Gaelic games, particularly those at the highest level”.

“As things stand, larger counties have access to substantially more resources, larger sponsors and so on which, in turn, permits them facilitating greater supports.”

Intercounty GAA players receive monies through a player support scheme from Sport Ireland. A €6.9 million deal was announced in 2016 for 2017, 2018 and 2019 and payments last year ranged from €970 to €2,227 depending on how far players’ counties progressed in the championship.