UK government committed ‘to avoiding a hard Border’ in any scenario 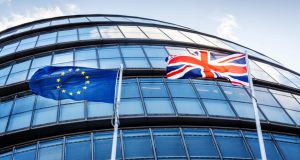 In a document examining the impact on business of a no-deal exit, the UK government says that the cumulative impact from a no-deal on the Northern Ireland economy would be “more severe” in the North than elsewhere in the UK. Photograph: iStock

The UK government will shortly publish its plans for temporary arrangements to cover trade between Northern Ireland and Ireland in the case of a no-deal Brexit, according to a document it published on Tuesday on the impact on business of leaving the EU without a deal.

The document repeats that the UK government is committed “to avoiding a hard Border between Northern Ireland and Ireland in any scenario.”

In a document examining the impact on business of a no-deal exit, the UK government says that the cumulative impact from a no-deal on the Northern Ireland economy would be “more severe” in the North than elsewhere in the UK and would last for longer.

This is because of the North’s unique circumstances, it says , including its land border with the EU, its reliance on the food sector and the current lack of an executive.

The document repeats the commitment of the UK government to avoid a hard border on the island of Ireland, adding that it “will shortly publish further details of the immediate, temporary arrangements for trade between Northern Ireland and Ireland in a no-deal scenario.”

It adds that it would need to work with the EU and the Irish Government “ to find any sustainable longer-term solution” on the border issue.

However there is a recognition that checks will be needed at some point on goods movements – either between the UK and Ireland or at the border – to protect the integrity of the EU single market after Brexit in the event of a no-deal Brexit.

Earlier estimates, repeated in the paper, suggest that Northern Ireland is one of the regions most exposed to a no-deal Brexit,likely to suffer a long-term loss of 9 per cent of GDP.

This assumes a smooth transition to a new trading regime and does not account for the likely further loss from short-term disruption.

A no-deal exit would disrupt the closely interwoven supply chains that run across the Irish border, the document warns, and along with increasing costs this could hit the viability of many businesses. This could result in businesses failing or in some cases moving across the border to the Republic, it says, “with knock-on consequences for for the Northern Ireland economy and unemployment.”

Northern Ireland’s reliance on SMEs and its close trade links with the Republic makes it particularly vulnerable, the document says.

The agri-food industry is particularly at risk, it says, given its reliance on cross-border supply chains .

There could also be risks to cross-border cooperation on crime and security “and potential for community tensions to be heightened.”

An increase in smuggling and criminality was also a risk .

The document warns of the risks of delays at Channel ports, a route used by many Irish businesses to bring product from Continental EU markets through the UK to Ireland , with time-sensitive food supply a particular issues. Potential disruption to cross-Channel trade “would lead to reduced availability and choice of products” in the UK market, the document said.

“This would not lead to an overall shortage of food in the UK, and less than one in 10 food items would be directly affected,” it says.

“However, at the time of year we will be leaving the EU, the UK is particularly reliant on the short Channel Crossings for fresh fruit and vegetables. In the absence of other action from Government, some food prices are likely to increase, and there is a risk that consumer behaviour could exacerbate, or create, shortages in this scenario.”