Commission and Government to explore help for SMEs after Brexit

Any assistance would need to comply with state aid rules 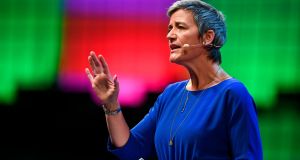 The European Commission and the Government have established a joint working party to examine how the State can assist SMEs affected by Brexit without breaking EU state aid rules.

Tánaiste and Minister for Enterprise and Innovation, Frances Fitzgerald, met European commissioner for competition, Margrethe Vestager, in Brussels on Friday and agreed the establishment of the working group of officials from Brussels and Dublin. It will meet within weeks.

The Tánaiste presented the commissioner with her department’s report “Building Stronger Businesses”. Both discussed the likely impact of Brexit on particularly sensitive businesses such as those on the Border, engineering, tourism, agri-food and other sectors. A spokesman for the Minister said both agreed that it is important the Republic responds in a flexible and timely manner.

Ireland has argued that the effect of Brexit on its economy would be highly “asymmetric” compared to other member-states. That should justify special measures and the bending of EU state aid rules. The Commission, on the other hand has argued that there is sufficient flexibility within the system to achieve the same end.

Business group Ibec has warned that SMEs with a high proportion of trade with the UK, across a range of goods and services sectors, will be more severely impacted than larger multinationals, which would be better placed to cope.

1 I want to change my will quickly in case I fall ill. Do I need a lawyer?
2 Lockdown exit: How can Irish economy reopen without big health risks?
3 Property market has not felt full impact of Covid-19, warns Sherry FitzGerald
4 Finance ministers gather as fears grow even the future of the euro zone is at risk
5 Coronavirus: The online scams, apps and trends you need to know about during the pandemic
6 Fitbit releases Charge 4 ahead of expected Google acquisition
7 Facing economic meltdown ... and nothing wrong with our economy
8 Tesco says coronavirus costs could reach €1bn
9 We cannot afford to neglect supply chains when supporting business
10 Five ways to create a culture of innovation in the workplace
Real news has value SUBSCRIBE