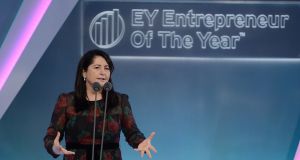 Carrick Therapeutics is back on the fundraising trail after finally tapping the last of the $95 million (€85 million) it raised at its launch in 2016.

Carrick, which is focused on developing pioneering treatments to defeat many of the most aggressive and resistant cancers, secured backing from a number of high-profile investment managers ahead of its launch as well as high-profile investors like State Street and the University of Cambridge.

It was also formerly backed by Woodford Investment Management, a key part of fund manager Neil Woodford’s investment empire until its recent collapse.

Filings at Companies Office show that the business tapped the last $16 million of the original funding late last year, alloting shares to the investors involved.

And that means it is back on the trail of new funds as it looks to deliver breakthrough therapies targeting the spread of cancer cells and also a form of ovarian cancer.

The company was co-founded by Elaine Sullivan, a former vice-president for research and development at both US drugs giant Eli Lilly and British peer AstraZeneca. It is privately held in Dublin with operations in the UK and US.

Dr Sullivan was named Emerging Entrepreneur of the Year at the EY awards in 2018 and was also a finalist in The Irish Times Business awards. Last year she relinquished her role as chief executive of the company after it established operations in Boston, Massachusetts.

She now has a role as “executive entrepreneur and adviser to the board of directors” with industry veteran Tim Pearson now serving as chief executive. Mr Pearson joined Carrick after serving as chief finance officer for Tesaro, a public oncology-focused biopharmaceutical company acquired by GSK for $5.1 billion in January 2019. Prior to this he was chief financial officer for Catalyst Health Solutions, which was bought by SXC for $4.4 billion.