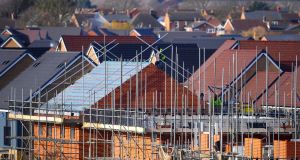 If the UK manages to agree a deal, prices in London and Northern Ireland are still predicted to fall this year, by 4.7 per cent and 1.2 per cent, while most other regions will be largely unchanged. Photograph: Joe Giddens/PA Wire

House prices in the UK could fall by as much as 20 per cent in the event of a no-deal Brexit with London and Northern Ireland worst hit, KPMG has warned.

Assessing the likely impact of Brexit on the property market, KPMG said house prices are expected to increase once the Brexit uncertainty has lifted and a deal has been agreed.

However, it said a no-deal could see house prices fall by around 6 per cent in 2020, “with a drop of 10-20 per cent not out of the question if the market reacts stronger than anticipated”.

“Overall, while our forecast represents a plausible response of house prices to the shock of no-deal, the overall impact is highly uncertain,” KPMG’s report said.

“ It is possible that the demand for housing is further affected by a fall in confidence, with homebuyers becoming ever more reluctant to commit to house purchases over the coming year,” it said.

The report said no regional market would escape unharmed in the event of a no-deal. Assuming no agreement is reached, KPMG says Northern Ireland will be the hardest hit next year, with average price declines of 7.5 per cent , followed by London at 7 per cent. The least-hit will be Wales and the East Midlands, with 5.4 per cent declines apiece.

“The level of leverage in the housebuilding sector is also much lower – meaning that volume housebuilders will be under less pressure to materially reduce prices. This helped create the downward spiral of prices in the global financial crisis,” she said.

If the UK manages to agree a deal, prices in London and Northern Ireland are still predicted to fall this year, by 4.7 per cent and 1.2 per cent, while most other regions will be largely unchanged.

“Valuations are the main drivers for house prices in this scenario, with the biggest corrections taking place in regions where valuations are already stretched,” it said.