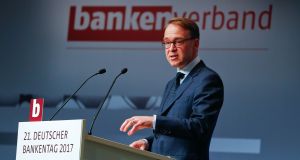 German Bundesbank president Jens Weidmann: ‘The question is whether new measures are necessary based on our inflation outlook.’

The head of Germany’s central bank has announced his opposition to launching a monetary or fiscal policy stimulus package in response to the recent slowdown in Europe’s biggest economy.

Jens Weidmann said it was not time to “panic” even though the German economy was heading for its first recession in six years after shrinking slightly in the second quarter, hit by US-China trade tensions, weak global growth and fears of a chaotic UK exit from the EU.

His comments show how divided the world’s economic leaders are on the best way to respond to signs that the decade-long boom in the global economy is about to come to a shuddering halt.

Positioning himself against a sizeable resumption of bond-buying by the European Central Bank, Mr Weidmann said he was “particularly cautious about government bond purchases” because they could blur the line between monetary and fiscal policy.

“The question is whether new measures are necessary based on our inflation outlook, particularly if side-effects grow and effectiveness diminishes,” he told the Frankfurter Allgemeine Sonntagszeitung in his first interview since being passed over in the race to succeed Mario Draghi as president of the ECB.

His comments put Mr Weidmann at odds with market expectations that the ECB will launch a sizeable package of monetary easing measures next month, including a cut in interest rates further into negative territory and a resumption of its bond-buying programme.

“We are in an economic slowdown,” said the Bundesbank president, adding that politicians would need to provide fiscal stimulus if the German economy fell into a deep recession.

However, he said that “automatic stabilisers” built into Germany’s generous tax and welfare system should be the first measures relied on to offset economic weakness.

While he said the German government still had some fiscal headroom before running up against its constitutional ban on running large budget deficits, he argued that there was no need for a large-scale stimulus programme.

Mr Weidmann has long been one of the most hawkish members of the ECB’s governing council and a vocal critic of the unconventional monetary policy measures used by Mr Draghi to restore stability to financial markets after they were shaken by the euro zone debt crisis.

Yet Mr Weidmann seemed to indicate he would grudgingly support a further cut in interest rates from their current level of minus 0.4 per cent. “The lower the interest rates, the stronger the incentive to hold cash,” he said, while adding: “However, we have not reached this point in my view.” – Copyright The Financial Times Limited 2019

1 MSD buys Takeda biologics plant in Dunboyne
2 ‘Saudi Arabia is where the opportunities will happen in future’
3 Data centres will force State to choose between climate and investment
4 Project to identify spare intensive care beds accelerated by pandemic
5 Trump’s TikTok move may have far-reaching consequences
6 Facebook agrees Irish wind-farm deal with Brookfield in Tipperary
7 What will the office market look like after the great remote working experiment?
8 Two men face fraud charges over £1.2bn sale of Nama’s NI loans
9 How your country’s history affects the way you think
10 Irish Times Business Awards: Local Enterprise of the Year nominees
Real news has value SUBSCRIBE