UK budget’s digital tax, Brexit hits consumers and why it can pay to earn less 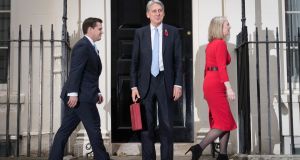 Technology giants Google, Facebook and Amazon will face a new digital services tax in the UK from 2020 under plans announced by chancellor of the exchequer Philip Hammond in his budget speech on Monday. While it drew a lot of headline coverage, Denis Staunton reports from London on how it doesn’t cover up the fact that with economic growth forecast to remain at 1.5 per cent or lower for the next few years, the British economy can ill afford to suffer the slowdown that most economists predict would follow a no-deal Brexit.

The UK Chancellor also earmarked an additional £320 million (€360 million) to a “Northern Ireland Executive” as the North marks nearly 21 months without a government in place to take key spending decisions. The latest boost for the North means that the overall Northern Ireland budget will jump to more than £11.7 billion by 2020.

Back to Brexit and the mood of consumers dropped sharply in October, but sentiment among businesses held up and 44 per cent plan to increase their employees’ basic pay over the next 12 months, according to Bank of Ireland’s “economic pulse” study. The study found Brexit concerns weighed on households in October, while Budget 2019 failed to trigger a boost in consumer confidence.

Profits at Lifestyle Sports fell by 20 per cent last year as it closed a number of stores and engaged in a restructuring of the business. Lifestyle Sports is owned by members of the Wexford-based Stafford family, which also controls Campus Oil.

Cantillon reckons Philips Green’s new notoriety has come at a particularly fragile time for his clothing retailers, already being eclipsed by cheapest-of-the-cheap Primark/Penneys and nimble online-only operations like Boohoo and Asos. With some shoppers threatening to boycott his businesses, now is not a smart time to be losing any of them.

In Your Money this week, Fiona Reddan considers the various state benefits, from childcare to third-level grants and from state pensions to the Fair Deal programme, and demonstrates why it can actually pay to earn less in Ireland in some instances.

Finally, Prionsias O’Mahony, with his usual incisive analysis of the financial markets, as whether short sellers are ‘unreasonably maligned’ or ‘jerks’.