Budget windfall for Belfast and the North

Latest boost for the North means that the overall Northern Ireland budget will jump to more than £11.7 billion by 2020 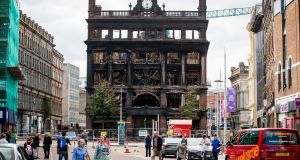 Among other deals, the UK Chancellor has set aside £2 million for the “recovery and regeneration” of Belfast city centre following the massive fire which devastated Primark’s landmark store at Bank Buildings in the centre of the city at the end of August

The UK Chancellor has earmarked an additional £320 million (€360 million) to a “Northern Ireland Executive” in his latest budget as the North marks nearly 21 months without a government in place to take key spending decisions.

The latest £320 million boost for the North means the overall Northern Ireland budget will jump to more than £11.7 billion by 2020.

Philip Hammond also gave the green light in his last budget before Brexit to a city deal for Belfast which will result in a £350 million investment from the UK Treasury.

In addition to the city deal the UK Chancellor has set aside £2 million for the “recovery and regeneration” of Belfast city centre following the massive fire which devastated Primark’s landmark store at Bank Buildings in the centre of the city at the end of August.

Among the other key measures specific to Northern Ireland outlined in the UK budget there will be funding worth £300 million for shared and integrated education projects.

People living in the North will also gain from the UK Chancellor’s to freeze fuel duty, while 80,000 workers in Northern Ireland will also benefit from his decision to raise the National Living Wage to £8.21 per hour next year. A further 26,000 people in the North will also profit from changes to the Minimum Wage, which will increase to £7.70 per hour and more people overall in Northern Ireland will enjoy the chance to keep more of what they earn with increases to both the Personal Allowance and the Higher Rate Threshold in the UK.

According to Mr Hammond his budget sends “a clear message to the people of Northern Ireland – your hard work is paying off.”

His decision to award Belfast a city region deal definitely got the biggest round of applause from many quarters in the North following the budget.

The partners group said: “As part of the deal, the Northern Ireland Executive is expected to add at least a further £350 million and councils will contribute over £100 million. It is hoped the deal will create up to 20,000 new and better jobs alongside delivering a 10 year programme of inclusive economic growth - including an increase of £470 million Gross Value Added (GVA).”

Angela McGowan, CBI NI Regional Director, said the Belfast city deal was a “sizeable investment” from the UK Treasury but the North’s economy continued to face many challenges - not least because of the uncertainty surrounding Brexit.

“Nonetheless, the government’s commitment should give confidence to other similar proposed City Deals in the North West which could play a big role in attracting investment and talent to Northern Ireland,” she said.

Ann McGregor, chief executive of the chamber said: “These measures, along with other announcements including the digital catapult (£215 million additional investment for UK innovation centres) and e-passports (enabling more travellers to be processed more quickly) will be welcomed by businesses here. The increase in the Annual Investment Allowance to £1 million for two years also gives firms a strong incentive to invest during the Brexit process.”

But despite all the extra money that Mr Hammond intends to send Northern Ireland’s way it is unlikely to soften the rising anxiety in the North about what Brexit could mean on the ground for businesses and consumers.

The Northern Ireland Retail Consortium director, Aodhán Connolly said there was “little in the budget overall which will help keep down the cost of doing business in Northern Ireland” while Stephen Kelly, chief executive of the campaign group Manufacturing NI, said relationships between businesses and government remained strained because of the UK’s “approach to Brexit”.

“The UK Chancellor could save the additional £500 million to help departments prepare for a No Deal Brexit if his colleagues in Cabinet would listen to those who create the jobs and wealth,” Mr Kelly warned.

The chief executive of the industry group, Hospitality Ulster, also said businesses remained in a “very difficult position” because of the absence of an Assembly and Executive.

Colin Neill said:”The potential for this Budget to deliver for the Northern Ireland economy and the hospitality sector was great, but instead it has left so many issues hanging and many questions unanswered.

“The UK’s 20 per cent Tourism VAT rate is one of the highest in Europe, and Northern Ireland hospitality and tourism businesses are particularly vulnerable as the Republic of Ireland is its second largest market and nearest competitor.”