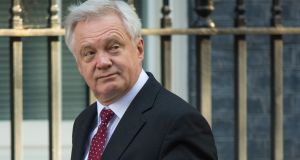 Brexit secretary David Davis expects Britain and the EU will agree to a transition deal by the end of March.

Brexit secretary David Davis has clashed publicly with the prominent Conservative backbencher Jacob Rees-Mogg over plans for Britain to accept the jurisdiction of the European Court of Justice during the Brexit transition.

Mr Rees-Mogg, who has just been appointed to chair the well-co-ordinated European Research Group of pro-Brexit Tory MPs, suggested to Mr Davis that Britain would be a “vassal state” during the transition period.

Appearing before MPs on the House of Commons Brexit select committee, Mr Davis was repeatedly challenged by Mr Rees-Mogg.

“If on the 30th of March 2019 the UK is subject to the jurisdiction of the ECJ, takes new rules related to the single market and is paying into the European budget, are we not a vassal state?” he asked.

Mr Davis replied: “If that were going to be the case in perpetuity, my answer would probably be yes, but the answer for a short time, no”.

Mr Rees-Mogg said: “It’s hard to think of any precedent in the world where an independent nation has taken the judgments of a foreign court as its superior and immediate law without having any judge on that court.”

Asked whether ECJ jurisdiction remained a “red line” for the government, Mr Davis said he personally had never used the phrase, and any company director who entered into negotiations publicly setting out red lines would be an “idiot”.

The testy exchange reflects rightwing Tory backbenchers’ increasing frustration at how the Brexit negotiations have been handled on the UK side.

When Mr Davis said it was unlikely that any new laws would be implemented by the EU during the transition period – expected to be about two years – Mr Rees-Mogg said: “Isn’t that a rather weak answer?”

Mr Davis said: “We’re going from one state to another – you can call it what you like, but I don’t think it’s a vassal state.”

The British parliament has been promised a vote on the withdrawal deal, and Mr Rees-Mogg’s open scepticism raised the question of whether prime minister Theresa May could struggle to secure her own MPs’ backing.

Also at the hearing, Mr Davis repeated his claim that the “substantive details” of Britain’s trade deal with the EU27 would be completed by March next year, and he insisted the government would not pay “danegeld” to secure access to the single market – a reference to the tax paid by some English kings to deter Viking raiders.

EU chief negotiator Michel Barnier has suggested negotiations on the final trade deal will take “several years” , continuing into the implementation period that will follow the UK’s departure.

But Mr Davis said “all of the substance” of the deal covering the UK’s future relationship with the EU would be agreed before Brexit day in March 2019, as it would be “unwise” to let talks drag on into the transitional period.

He said some “fine detail which I’m not worried about” could be ironed out at a later date. “Frankly that’s the logic of the strategy. If you start an implementation period before you know the outcome, that’s not wholly useful to the bank that’s thinking about whether it transfers or not, or the pharmaceutical company that’s deciding what it does about its research, and so on.”

Asked whether the “deep and special partnership” the government seeks would require continued payments into the EU budget, Mr Davis said: “I don’t think that will be necessary.”

“We may well be involved in scientific research issues, for example where we make a contribution – Erasmus for example. Why? Because it’s in our interest. But I don’t see us paying for access.”

The shadow Brexit secretary, Keir Starmer, said afterwards: “The bickering between David Davis and Jacob Rees-Mogg is the starkest evidence yet that a transitional deal is far from secure under this government. The Tories are split right down middle on one of the most important questions facing the country. Thousands of jobs depend on securing strong transitional arrangements as soon as possible.” – Guardian