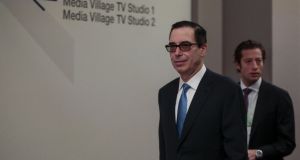 Two of Donald Trump’s most senior cabinet members delivered mixed messages on the US’s economic and trade agenda to the World Economic Forum in Davos on Wednesday, ahead of the US president’s much-anticipated address to the conference later this week.

Leading an advance party to the Swiss ski resort, US treasury secretary Steven Mnuchin insisted his country was “open for business” and “absolutely” believed in free and fair trade.

The former Goldman Sachs banker added at a press briefing that a strong US economy was beneficial to the world and that there was “no question” that tax reforms signed into law late last month were having a positive effect on the market.

However, US commerce secretary Wilbur Ross, best known in Ireland for making an estimated €500 million profit on a crisis-time investment in Bank of Ireland, indicated at the news conference that the US was ready for trade wars.

“There have always been trade wars,” Mr Ross said. “The difference now is US troops are now coming to the ramparts.”

The Trump delegation’s arrival at Davos, the epicentre of the globalisation agenda, came days after the president imposed tariffs on imported washing machines and solar panels in an effort to “protect” American jobs and “demonstrate to the world that the United States won’t be taken advantage of any more”.

Mr Trump’s decision earlier this month to become the first sitting US president to attend the event since Bill Clinton in 2000 has prompted widespread head-scratching among many of the other 3,000 participants of the four-day talking shop on everything from tackling climate change to the rise of cyber attacks, corporate greed and sexual harassment.

“We don’t have to worry about this crowd,” said Mr Mnuchin. “As the largest economy in the world it’s very important to interact with our counterparts.”

The remarks come days after the International Monetary Fund said the world economy was likely to grow 3.9 per cent this year and next, up 0.2 percentage points for both years on its previous forecast, on the back of a better outlook for the US and euro-zone economies. The fund said the US tax overhaul, cutting the main corporate tax rate to 21 per cent from 35 per cent, would likely boost the world’s largest economy by 1.2 per cent by 2020.

Mr Mnuchin said the ongoing weakness of the dollar against other major currencies was providing a boost to the US trade.