Two years on, Manchester fights back against Brexit 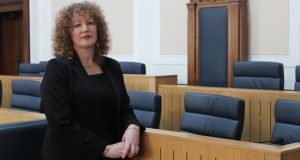 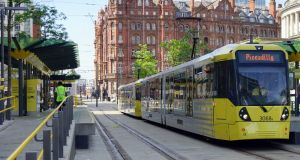 The Metrolink tram/light rail system in Greater Manchester. Although battling with legacy transport issues, things are beginning to change for the better. Photograph: Getty Images 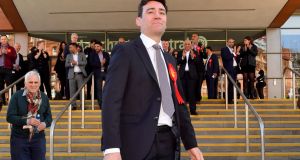 Labour’s Andy Burnham: “We don’t want the Irish people to think the Brexit-obsessed crowd down in London are speaking for us. They’re not.” Photograph: Getty Images

When Theresa Grant arrived in Manchester on a one year career break from Wexford County Council in 1996, the city was beginning a £32 million regeneration project having been battered by terrorism and struggling economically with a population that was neither productive nor wealthy.

Some 22 years later, Grant has seen at first hand a city that has turned its own fortunes around to the point where it is now becoming the fastest growing region in the UK – even faster than London.

Now chief executive of Trafford Council – the wealthiest area in Greater Manchester – she is an integral part of a city determined to shake off the negativity seen in the rest of the country associated with Brexit, and make this region an attractive one for potential investors.

“Manchester doesn’t like to be second to anybody,” she says over lunch on the top floor of a building overlooking Piccadilly Gardens.

Over the last three years the city has proved that ,having achieved devolution of key powers from Whitehall, including management of its own health budget. It is the first such example of devolution in the UK, and allows the city to have more control of its own destiny against the ongoing political backdrop of uncertainty as Brexit talks trundle on.

“It was like the millennium. The computers didn’t all stop, and it was a bit like that after the Brexit vote. [The city] is probably thriving now the way it did in the late 1990s. It’s back to that buzz, and there’s real opportunity for investment and growth.”

While all this is positive, there are still uphill battles to be fought in a region which is now competing against London.

The dominant position of the capital isn’t something that can change overnight, and a recent forecast from financial services company EY suggests that the north/south divide will widen. But Grant and her fellow Mancunians are determined that the city cements its place as an economic exemplar within the UK. And through the UK government’s Northern Powerhouse Initiative, that growth is possible.

Andy Burnham, the mayor of Greater Manchester, left national politics last year having served as shadow home secretary in the Labour party. He gets frustrated with the outside perception of the UK.

“We’re a country that is very unbalanced. The focus on London is often to the detriment of the country,” he stressed in his office perched on Manchester’s Oxford Street.

The disillusionment Burnham felt with the Westminster machine led him to believe that “if they can ignore the north, they will”. As a result he upped sticks and became mayor of a city he sees as having considerable potential, even in the midst of anxiety in some quarters surrounding Brexit.

Like Grant, Burnham isn’t terribly concerned about the decision to leave the European Union, but it does present him with some frustrations.

“We’re getting frustrated. We don’t want the Irish people to think the Brexit-obsessed crowd down in London are speaking for us. They’re not.”

Rather then see it as a negative, Burnham views Brexit as an opportunity for Manchester and other regions and cities to take greater control of their own destiny.

Be that as it may, the recently installed mayor has a variety of issues to deal with. Like all modern cities, growth has touched some sectors more than others, and the city has underlying problems to contend with.

Productivity is woefully low, falling behind the UK as a whole which is itself already behind Europe.

Transport in the city, or indeed the region, is not up to scratch. Buses in Manchester are chaotic following deregulation in 1985 by the then prime minister Margaret Thatcher. Although battling with legacy transport issues, things are beginning to change.

An innovative project called CityVerve is aiming to find technological tools to help power a “smart city”. That project is one in which Irish companies are playing their part. The Galway-based CitySwifter is involved in the project, identifying demand for bus routes in real time. The Irish company is one of a number with ambitions to scale their business in Manchester. Indeed, Irish players that have been here for a number of years are very complimentary of the possibilities and opportunities it delivers.

Owen Sisk, a business development director at Sisk Contractors, notes that Manchester’s political leadership, combined with the Northern Powerhouse Initiative, creates business confidence. That, in turn, “allows you to grow your operations”.

One of the fifth generation in the Sisk family whose company has a turnover of around €1 billion a year, Owen Sisk notes that it has scaled up its operations in the Manchester region over the last six years “as a result of being able to see what a good pipeline of opportunities exists here”. Those include road-building projects, a high-speed railway to London and early-stage plans for east to west rail connectivity.

Sisk’s Manchester operation has existed for 20 years, and although business confidence throughout the whole of the UK has taken a slight hit on the back of Brexit, Manchester has remained a positive environment.

“People will go to places where they know they can transact and do business, and people know that they can do business in Manchester,” Sisk said.

That is echoed by Minister for Business, Enterprise and Innovation Heather Humphreys, who led a trade mission backed by Enterprise Ireland to Manchester this week.

“I do believe that there’s a real willingness here to work with Irish businesses,” she said, having met both Irish and Manchester business leaders at a trade dinner. “Regardless of Brexit…we’re going to do business with our closest neighbour, and that’s the way things are.”

And Tim Newns, the agency’s chief executive, says the presence of big banks and financial services firms in the region has had the effect of growing the tech sector, with moneysupermarket.com and boohoo.com both having a significant presence in the region.

As recently as last week the UK government announced that intelligence agency GCHQ would bring hundreds of jobs to Manchester in a secure intelligence site designed to be “at the heart of the nation’s security”.

Of course, the pace of growth poses its own difficulties. House prices are accelerating above the UK average, with the growth rate far above London. That, as one would expect, is to some extent contained in popular areas of the city. Newns believes that, rather than be a negative, house-price growth in certain areas will focus ambitions to regenerate other localities like Bolton and Rochdale.

With a good reputation now created for Manchester, he believes the next phase will focus on inclusive growth to bring along the other areas around the city and, by consequence, the north as a whole.

That inclusive growth will have to overcome the differences within the region caused by Brexit. Both Liverpool and Manchester voted to remain in the EU but the wider northwest region voted to leave.

“We’re trying to look for the opportunities that may come from Brexit, rather than the challenges. Obviously like any sensible place we manage the risks and make sure in our negotiations with national government that those risks are being heard and protect the interest of the industries that are strong here,” Newns says.

The perceived risks, however, have not manifested themselves as he has seen it. Although some large corporates have delayed decision-making, they haven’t been put off from coming to the region. That, no doubt, will buoy Irish companies considering investment in the area. While Ireland is the fifth largest trading partner for the UK as a whole, it’s the third largest for Manchester.

Officials in the area, which was last year found to be the most successful city for attracting foreign direct investment in the UK outside of London by EY, are keen to point out that healthcare is an area ripe for investment.

John Rouse, the chief executive of Greater Manchester health and social care, is responsible for overseeing the £6 billion healthcare spend. He is changing the way the National Health Service (NHS) works, and is trying to drive efficiencies by joining up what the NHS does with housing, education and social care.

Given its size – Greater Manchester boasts a population of around 2.8 million – the region is seen as a good testing ground for innovative healthcare solutions.

“For people who want to test new ways of working, things that will improve the health of our population and the care of our population, we are open for business,” Rouse says. If an idea works, he adds, companies will immediately have access to a market with 2.8 million people.

Brexit, Rouse says, has prompted Manchester to ensure that it is even easier to do business there.

He, along with Newns, Grant and Burnham share the same ambition in that regard. Such is Burnham’s ambition for the region, he agreed to organise a trade mission to Ireland later this year in response to the visit from Humphreys. Manchester wants, Burnham says, what the Irish Government wants in terms of a border arrangement that protects trade volumes between the Republic and the UK.

That vision is shared by the Irish delegation and, at the end of our meeting, Ms Humphreys, quoting Michael Smurfit, neatly sums up the message Manchester has sought to portray. “Opportunity comes to pass, not to pause,” she says noting “the timing is now. We need to get the business.”

1 Fianna Fáil may have just pressed the pause button on the property market
2 UK to prioritise EU trade deal over one with United States
3 Who are Ireland’s 17 billionaires?
4 Are there annual limits on inheritances or gifts to a child?
5 My father in a nursing home wants to gift me his house
6 O’Flynn ‘very unhappy’ with extra payments to former employee, court hears
7 American YouTubers embrace the crisp sandwich
8 Eason puts Blanchardstown store on market at €16m
9 State ranked highly for attracting skilled workers but low on gender equality
10 Coffey decides against second term as chair of Irish Fiscal Advisory Council
Real news has value SUBSCRIBE