How sensitive is the Irish economy? 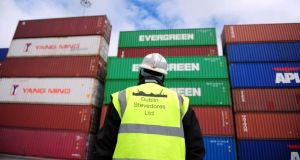 In the immediate aftermath of the crash it became fashionable to stress-test banks, to see if they could withstand shocks, and with good reason: they were, after all, the locus of the meltdown. This process has now been extended to economies, and the Republic’s export-led, multinational-dominated one is a perfect candidate.

In the Government’s latest stability-programme update the Department of Finance assesses the sensitivity of our economic projections to changes in three key variables. It simulates the impact of “stylised shocks” in world demand, average wages and interest rates, using the Economic and Social Research Institute’s Cosmo modelling system.

Unsurprisingly for a small open economy, a 1 per cent deterioration in world demand relative to baseline projections dampens Irish growth, with the impact primarily transmitted through the trade channel. Overall output or gross domestic product here would be 1 per cent lower after five years, suggesting a neat one-to-one transmission, while employment would be 0.6 per cent lower.

A 1 per cent jump in labour costs reduces GDP by a more modest 0.2 per cent and employment by 0.1 per cent after five years.

More significantly, especially in the context of rising interest rates, a 1 per cent hike in the European Central Bank’s main lending rate reduces Irish GDP by more than 1 per cent in the medium term and by 0.9 per cent after five years, with employment falling by 0.5 per cent.

These assessments were largely overshadowed by conjecture about the budgetary arithmetic facing Minister for Finance Paschal Donohoe and, in particular, news that exports of Apple’s iPhone accounted for a quarter of our economic growth last year. This revelation, contained in the special report accompanying the International Monetary Fund’s latest global-outlook report, reveals the impact of these tech behemoths on national economies and Ireland’s exposure to them.