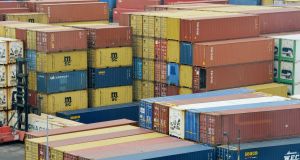 The value of Irish exports fell by 12 per cent to €10.9 billion in February while imports rose marginally to €6.9 billion.

This resulted in a trade surplus for the month of just under €4 billion, down €1.5 billion or 28 per cent on the previous month.

While the monthly trade numbers from the Central Statistics Office (CSO) are volatile, the underlying trend remains positive with the value of exports for the year so far put at €22.3 billion, up 11 per cent on the corresponding period last year.

The main drivers were exports of medical and pharmaceutical products, which rose by €565 million (18 per cent) to €3.6 billion in February compared with the same month last year.

Exports of electrical machinery, apparatus and appliances fell by €343 million (47 per cent) to €385 million.

The Republic’s trade with Britain has so far been largely unaffected by Brexit with exports and imports remaining steady.

The latest numbers show exports to Britain fell €98 million or 9 per cent to just over €1 billion in February.

Overall the European Union accounted for €5.3 billion (52 per cent ) of total Irish goods exports in February, of which €1.5 billion went to Belgium and €797 million went to Germany.

Antwerp in Belgium is one of the largest global drug redistribution hubs and receives most of the State’s pharma exports which are not destined for the United States.

The US was the main non-EU destination, accounting for just under €3 billion (28 per cent) of total exports.

The UK’s imminent departure from the EU poses a serious risk to trading relations between the Republic and Britain.

While the UK government has signalled it will leave the EU’s customs union in 2019, it has proposed a continued close association for a time-limited period to minimise disruption and allow a smooth and orderly transition to the new arrangements.

“Business and consumer confidence have been dented to some degree, though not in major way by the uncertainty surrounding Brexit,” Merrion analyst Alan McQuaid said.

“Indeed, the trade data for 2016 and 2017 were positive. Still, the uncertainty over the implications of Britain’s decision to leave the EU suggest risks on the external trade front remain elevated going forward, especially for food exporters,” he said.

Mr McQuaid said the euro-sterling exchange rate would be critical. “The pound has rallied since the start of the year, but for the improvement to be sustained, positive vibes coming out of Brussels as regards the Brexit negotiations will be required,” he said.

1 Opioid executive admits to ‘no morals’ ahead of prison term
2 Are there annual limits on inheritances or gifts to a child?
3 American YouTubers embrace the crisp sandwich
4 Farmer seeks to challenge €3.6bn Intel plan in High Court
5 My father in a nursing home wants to gift me his house
6 Israel seeks to become the Promised Land for foreign investors
7 Apple’s Irish company structure key to EU tax finding
8 ‘We get on with things despite the politicians’
9 Ireland v the rest of the world: Do we pay too much tax?
10 Microsoft sued by 'frozen out' ex-worker
Real news has value SUBSCRIBE