Ulster Bank once again in limbo as Gerry Mallon checks out 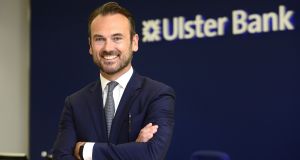 Gerry Mallon, who is checking out as CEO of Ulster Bank in the Republic to take charge of Tesco Bank in the UK. Photograph: Cyril Byrne

Gerry Mallon took everyone by surprise with the announcement on Wednesday that he was checking out of Ulster Bank in the Republic after just 19 months in charge to become chief executive of Tesco Bank in the United Kingdom.

He is swapping a substantial player in a small economy for a challenger bank in a large market. It’s a curious move.

Mallon said he was “thrilled” to be joining Tesco Bank as it provided a “unique opportunity” to provide services to millions of customers.

It was only in August 2016, in an interview with The Irish Times, that Mallon was equally excited about the challenge that lay ahead with Ulster Bank in the Republic, having defected from Danske Bank in the North.

“I could see that in the Republic of Ireland there was a strong economy and a fundamentally strong bank with the weight of RBS’s resources behind it, which could be a very powerful challenger in this market,” he said.

His brief was to take Ulster Bank “on to the next level”, and to “draw a veil over the resolution of the post-2008 crisis and start to fulfil the potential of the business”.

While he might have had some success in reshaping the business internally and sharpening its market strategy, he was less than assured in his handling of the tracker mortgage scandal, which has further battered the reputation of all Irish banks.

We can only presume that Mallon will receive improved terms in his new role, which must have been a motivation. The switch might also signal that he had come to the realisation that Ulster Bank was always going to struggle for scale in this market.

Who will replace him? Ulster Bank’s finance chief Paul Stanley filled the role for an extended period before Mallon took the reins, and could be a contender.

Liam McLoughlin, who stepped down on Monday as head of Bank of Ireland’s Retail Ireland division, has also been mentioned in dispatches. Or RBS might prefer to put their own person into the role.