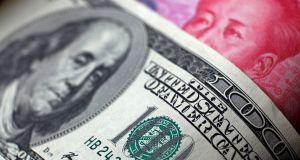 US president Donald Trump remained defiant on Twitter on Tuesday despite widespread anxiety in the markets. Photograph: Reuters

The ongoing trade war between the United States and China deepened considerably after the US treasury labelled China a currency manipulator. The provocative move – announced after markets closed on Monday – was taken after China allowed the renminbi weaken to under 7Rmb to the dollar.

US president Donald Trump remained defiant on Twitter on Tuesday despite widespread anxiety in the markets.

“Massive amounts of money from China and other parts of the world is pouring into the United States for reasons of safety, investment, and interest rates!” he wrote in an early morning tweet. “We are in a very strong position. Companies are also coming to the US in big numbers. A beautiful thing to watch!”

“As they have learned in the last two years, our great American Farmers know that China will not be able to hurt them in that their President has stood with them and done what no other president would do – And I’ll do it again next year if necessary!” The Trump administration has already signed off on two multi-billion dollar bailouts for farmers, including a $16 billion (€14.3 billion) package in May.

The American Farm Bureau Federation, a representative group for farmers in the US, said that the announcement from China was “a body blow to thousands of farmers and ranchers who are already struggling to get by”.

US markets steadied somewhat on Tuesday after suffering their worst trading day of the year on Monday after China allowed its currency to weaken, prompting fears of a currency war. The Dow Jones opened up about 0.8 per cent, maintaining these gains despite fluctuations. The tech-heavy Nasdaq was also trending upwards throughout the day.

Markets were somewhat buoyed on Tuesday by the fact that China pushed the yuan weaker but not past the symbolically significant 7-per-dollar which had so rattled investors the previous day.

But global markets remained volatile amid concerns that a currency war could accompany the trade tensions that are playing out between China and the US.

Fears of a new front in the trade war between the world’s two largest economy have resurfaced this month after Mr Trump unexpectedly announced that he would impose a 10 per cent tariff on $300 billion (€267 billion) of Chinese exports into the US next month, because of dissatisfaction with the direction of trade talks between treasury secretary Steve Mnuchin and US trade representative Robert Lighthizer and Chinese counterparts.

The new tariffs are in addition to the 25 per cent tariffs levied on $250 billion (€223 billion) worth of Chinese imports earlier this year.

But a senior member of the Trump administration on Tuesday moved to assuage investor concerns by suggesting that the tariffs could be revisited.

“The reality is we would like to negotiate,” he told CNBC. “We’re planning for the Chinese team to come here in September. Things could change with respect to the tariffs.”

1 Bank leaked my loan request to family who tried to rip me off
2 Ryanair and Aer Lingus monitor impact of coronavirus on travel to Italy
3 Boris Johnson's new immigration regime will damage much more than industry
4 Exposed to coronavirus: How Irish business is coping with fallout
5 Beau Lotto: How to rewire our brains to spark innovation
6 Five ways to create a culture of innovation in the workplace
7 Artomatix buyer revealed as Unity Technologies
8 Billionaire Zara founder and German funds vie for prime Dublin offices
9 Will Avolon find itself on the block as China prepares to seize troubled parent HNA?
10 Doing the business
Real news has value SUBSCRIBE