Time is running out to negotiate a transition period after Brexit 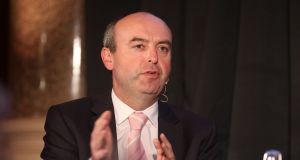 Whether negotiations can now quickly get under way on a transition period to apply after the UK leaves the EU is becoming a pressing issue for Ireland and businesses in the State. Talks on the transition period, which would leave existing trading arrangements roughly as they are until December 2020, need to make progress quickly, if the overall negotiations are to stay on track.

However, the fresh political tensions between the EU and the UK which emerged after Wednesday’s publication of a draft withdrawal text by the European Commission have cast doubt over this timetable.

There are also ongoing disputes between the UK and EU over aspects of how the transition period will operate, particularly in areas such as citizens’ rights. The draft withdrawal agreement envisages the transition ending in December 2020, despite UK calls for flexibility on the date.

The most obvious risk now is that the talks collapse, raising the prospect of a “no deal” Brexit, with no transition period after the UK leaves, or a late scramble to reach an agreement later this year.

A recent study by Copenhagen Economics said that under a hard Brexit, Irish GDP would be 7 per cent lower by 2030 than if there was no Brexit. Under any Brexit scenario, Irish growth would be hit.

Even if the talks do get back on track, for Irish businesses – and those in the UK – the problem is that the timetable is now getting very tight. Some agreement on the transition is needed to allow the talks to start to scope out how a new trade relationship between the UK and EU would look. This, together with final agreement on the withdrawal terms, is due to all be agreed by October.

Businesses still have no roadmap, according to Fergal O’Brien, chief economist at Ibec, the business representative group. Talks on the shape of a future relationship would extent through the transition period, he said, potentially giving businesses little time to plan and react to whatever deal is agreed.

The UK’s insistence that it will leave the EU trading bloc – leaving the single market and staying out of any new customs union with the EU – also poses a threat to trade between Ireland and the EU. Customs checks will be needed on trade across the Irish Sea between Ireland and Britain, and if a new free trade is not sorted out, damaging tariffs could also apply.

The fall-back arrangement on the Irish Border – calling for regulatory alignment between the North and the South – is the most practical way to avoid the return of trade barriers on the island, according to O’Brien. As well as this North-South issue, for business free trade “east-west” between Ireland and Britain was a vital, he said, involving significantly more trade.

According to MEP Brian Hayes, “It is time now to really start focusing our efforts on the east-west issues between Ireland and the UK. With about €1.2 billion worth of trade carried out across the Irish sea every week, we have so much at stake here.”

If no trade deal is done between the EU and UK, then rules set down by the World Trade Organisation would apply, involving tariffs – special import taxes – on many goods, higher prices and damaging delays and bureaucracy facing exports to and imports from the UK. However almost a year after Theresa May triggered the formal Article 50 process for the UK to leave the EU, the likely impact on the Irish economy and businesses here remains hugely uncertain.