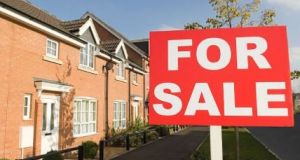 Most forecasters expect house prices to keep rising this year, but at a slower rate

In recent months any indications that the rate of house price growth might be slowing have been quickly followed by a renewed acceleration. And so it was that after some slowdown in November, the CSO figures for December show a 12.3 per cent annual rise in prices, the highest since 2015.

Many buyers are finding themselves priced out of the market, or pushed into their second or third choice of location. But so far there are more than enough purchasers who can afford the rising cost of a home – and so prices move ever higher. Most forecasters expect house prices to keep rising this year, but at a slower rate. But the market starts the year with considerable momentum.

The strong performance of the economy is supporting the market. Employment and incomes are rising and a cohort of immigrants are searching for property. Rock bottom interest rates are another support, as is the Government’s Help-to-Buy scheme, offering a tax rebate for many first-time buyers.

In December, prices usually fall back from November as the market slows for Christmas, but this year there was a monthly rise of 0.5 per cent, pushing the annual growth rate over 12 per cent. Prices outside Dublin – where the recovery has been slower since the bottom of the market – are rising at an annual rate of 13.3 per cent, compared to 11.6 per cent in the capital. As affordability becomes more of a factor in parts of the Dublin market, any significant signs of a slowdown are likely to appear here first.

While debate will continue about the Help-to-Buy scheme and the easing of Central bank rules for first-time buyers more than a year ago, the fundamental issue remains inadequate housing supply. Completions remain well below the required level, which is at least 35,000 new homes a year, and as well as prices this is pushing rents higher.

“Similarly, the dearth of transactions over the previous seven or eight years has created a significant measure of pent-up demand that has forcefully emerged of late,” according to KBC chief economist Austin Hughes. “This ‘bulge’ in demand will slowly ease in the next year or two.”

Hughes also referred to recent ECB research, which suggests that house price here are not overvalued in terms of the underlying strength of the economy. This analysis may be scant consolation for those priced out of the market. But tor the moment, at least, there is no stopping the upward march in prices.