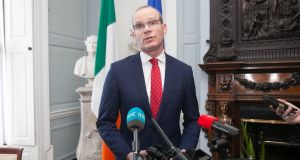 Tánaiste and Minister for Foreign Affairs and Trade Simon Coveney: the Government’s preference is for the customs issue to be dealt with under a new EU-UK trade deal. Photograph: Gareth Chaney/ Collins

The EU and UK must negotiate where customs checks would be conducted if the island of Ireland becomes “a common regulatory area” post-Brexit, Minister for Foreign Affairs Simon Coveney has said.

The EU’s draft withdrawal agreement, published by Brussels yesterday, plans for Northern Ireland remaining under single market and customs union rules to avoid a hard Irish border but the detail of where customs checks would take place is not spelled out.

The Irish side would not be drawn on the prospect of the border being pushed to the Irish Sea to maintain all-island regulations under the EU’s default “backstop” scenario, in circumstances where no EU-UK deal is reached on Brexit and London fails to produce its own solution for the border.

Instead, Dublin pushed out the timing on when the issue would be decided.

Mr Coveney told reporters that under the EU’s draft Brexit agreement a specialist joint committee comprising EU and UK representatives would try “to figure out the practicalities”.

“If there does need to be any customs checks, they would be done in partnership between the EU and UK customs teams, but of course our preference is there would be no customs checks required,” he said.

Under the EU plan, Northern Ireland would effectively remain part of the customs union, aligning with the EU on VAT and Brussels rules on state aid, and being subject to the European Court of Justice.

EU law would apply to agricultural produce and food as well as sanitary rules, ensuring the free movement of goods across the Border, but under the draft plan this would require customs checks between Northern Ireland and Britain to protect the integrity of the single market and customs union.

The EU’s chief negotiator on Brexit, Michel Barnier, has conceded that border checks within the UK may be necessary but he told reporters in Brussels that he would “not refer to a border”.

Instead, he sees future customs controls between the EU and the UK “somewhere in airports and ports”, raising the prospect of new checks at Northern Ireland’s ports.

This has fuelled anger among the DUP and other Brexiteers over the EU’s draft Brexit plan and leading to accusations that the EU was trying to annex Northern Ireland. British prime minister Theresa May has said that would create “a customs and regulatory border down the Irish Sea and no UK prime minister could ever agree to it”.

Mr Coveney said that the Government did not want to see customs checks on trade North and South of the Border or east and west between Northern Ireland and Britain or between Ireland and the UK.

The Government’s preference is for this to be dealt with under a new EU-UK trade deal, he said.

Facing a difficult three-week period in the run-up to the next key EU summit and acknowledging tight timescale to agree a deal on Brexit before the UK’s planned exit in March of next year, Irish Government plans to prepare for a worst-case scenario of a hard Brexit continue apace.

Every Government department has submitted contingency plans to the Department of Foreign Affairs scoping out potential requirements, including emergency legislation and enhanced facilities at airports and ports, in the event of the UK crashing out of the EU without a deal.

Keeping well at work from the comfort of your home 09:28
‘The stakes are undoubtedly higher’ 08:50
Graduate programmes: embracing informal learning 08:48
TD calls for banning the wearing of paramilitary uniforms by dissidents 07:56
Producing the golden eggs of the bioeconomy 06:00