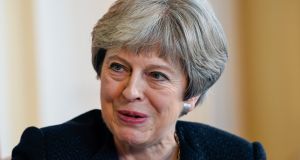 Awkward conversations across tables in Brussels have become normal in Brexit talks so Wednesday’s meeting between the EU’s deputy chief negotiator Sabine Weyand and her UK counterpart Olly Robbins was nothing new.

The sides met for a state-of-play session after two weeks of technical talks between the EU and British designed to put flesh on the bones of three options to avoid a hard border on the island of Ireland.

Judging from the outcome of Wednesday’s meeting, the bones remain pretty bare.

In fact, the view at EU level is that Britain has been trying to serve a reheated casserole of ideas that London has persistently dished up – and Brussels has consistently sent back – since last August.

The aim of this month’s sessions was to devise detailed plans around options A and B agreed in December’s EU-UK agreement, namely that arrangements could be found in either a future EU-UK relationship or bespoke solution to avoid a hardening of the Border after the UK quits the EU in March 2019.

Devising either plan was seen as critical to avoid option C, the so-called backstop that keeps Northern Ireland effectively in the EU customs union or single market, something that London doesn’t want.

At this week’s meeting, the EU side reportedly dismissed both Britain’s proposals to maintain a frictionless post-Brexit border: a “customs partnership” that would see Britain collect tariffs for the EU on European-bound goods and apply tariffs to imported goods, and a “streamlined customs arrangement” relying on technology and specific exemptions for north-south traders in Ireland.

The Daily Telegraph’s front-page hyperbolic reporting of the EU’s rejection in yesterday’s edition painted the meeting as a brutal telling-off of the British on their Northern Ireland proposals. The newspaper quoted senior EU diplomatic sources who described Theresa May’s no-hard-border plan as being subjected to a “systematic and forensic annihilation” and “a detailed and forensic rebuttal” by the EU negotiating task force.

This was downplayed by all sides. Sources described it in calmer terms. The British side is understood to have been told by the EU side that the customs partnership plan would not work from an EU perspective and while enhanced customs co-operation, proposed by London, would be helpful, it would not avoid the need for customs checks and therefore a hard border on a post-Brexit EU-UK frontier in Ireland.

Equally complex, and if not more complicated for North-South trade on the island and east-west with the UK, are the regulatory and sanitary checks that cover agricultural and food products and trade in manufactured goods. These areas were not covered in the two proposals Britain had suggested.

In Cork yesterday, Tánaiste and Minister for Foreign Affairs Simon Coveney, the Government’s playmaker on Brexit, declined to be drawn on the Telegraph’s report, saying Ireland would “do its talking” through the EU task force and in private discussions with the British.

Coveney’s public statements and those from Europe this week reflect a hardening of the EU’s position for progress on the Border issue before the next summit of EU leaders at the European Council at the end of June.

On Monday, Coveney said the Government was “putting down a marker” on the need for progress in Brexit talks on the Border, warning that unless substantial progress was made by June in putting an operational text around the backstop option, then efforts to agree an overall Brexit treaty might be in jeopardy.

In an opinion piece for The Irish Times this week, he said the UK must re-examine some of its red lines. For real progress on Northern Ireland, that would involve remaining in the single market or customs union, which would be a major shift in position for Theresa May’s government.

There is growing political pressure in London for an effective customs union after the House of Lords inflicted a thumping defeat for the UK government in a vote this week.

European Council president Donald Tusk raised the prospect on Wednesday of there being no transition deal unless the conundrum of avoiding a hard border is solved. This is significant in that this is the most recent bankable gain by the British in the run-up to last month’s European Council. Putting that back on the table is a reminder of the EU’s on-repeat mantra on Brexit talks: “Nothing is agreed until everything is agreed” and any risk to a transition period that would avoid a cliff-edge Brexit would alarm British business.

All sides moved to smooth concerns after the Telegraph’s screaming front-page “Ireland Brexit proposal in tatters” headline from one of Britain’s most pro-Brexit newspapers. Stefaan De Rynck, main adviser to the EU’s chief negotiator Michel Barnier, said there were four more rounds of talks on Ireland and Northern Ireland before the next European Council with the next meeting taking place in the first week in May.

So the clock is still ticking.

Helen McEntee, Minister of State for European Affairs, told The Irish Times insufficient progress by June could mean the October deadline for an overall Brexit agreement would be put in jeopardy and that could threaten the 20-month post-Brexit transition period “which is so vital for everybody”.

“If you leave too much to the last minute, then it makes it all the more difficult,” she said.

The EU and UK face a critical window until the June 28-29th European Council summit and during that period, Brussels and Dublin will be looking for more flesh for those bare bones on a Border solution.

“There is still time,” said McEntee. “We have two months.”