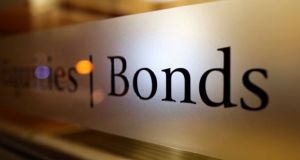 The National Treasury Management Agency (NTMA) said on Monday that it will look to raise up to €1 billion in a sale of 10-year bonds at auction later this week. The deal comes as Irish debt continues to fall to record lows.

Last month the NTMA raised a larger-than-expected € 4 billion from a sale of the 2050 bond, having attracted about € 18 billion of orders. It was priced to carry an interest rate of 1.53 per cent.

If the NTMA successfully raises €1 billion on Thursday, it will mean that the agency will have raised more than €10.5 billion through the sale of long-term bonds this year.

The NTMA has a target to raise between €14 billion – €18 billion this year. Most of the debt is being raised to finance the repayment of maturing bonds in the coming years.

Irish debt, along with German, Dutch, Spanish and Portuguese bonds, all hit record lows within recent days, as the European Central Bank ruled out raising interest rates in the coming year. Irish 10-year bonds are currently yielding 0.32 per cent, at a spread of 56 basis points to German bunds.

1 Are there annual limits on inheritances or gifts to a child?
2 Ireland has EU’s most progressive tax system, study finds
3 Who are Ireland’s 17 billionaires?
4 My father in a nursing home wants to gift me his house
5 UK to prioritise EU trade deal over one with United States
6 IDA chief says State could soon ‘be fighting for a smaller pool’ of foreign investment
7 Budget 2020: New emissions tax on new cars and used imports
8 Barclays to cut 100 senior roles as lender seeks to rein in costs
9 European investor acquires Harcourt Road offices for €55m
10 Push for tax treaty with Indonesia that could boost aircraft leasing
Real news has value SUBSCRIBE