John FitzGerald: Supporting OECD on taxing digital giants could be a small price to pay 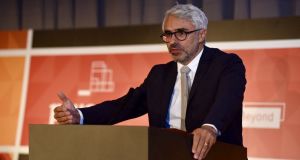 Pascal Saint-Amans of the OECD, who is leading a global initiative on tax reform. Photograph: Conor Mulhern

In the 1920s my grand-aunt Emily Brenan studied economics in Cambridge where, though successfully completing her studies, as a woman she was never awarded a degree. Cambridge only granted degrees to women from 1947. I still have her notes from Pigou’s lectures on the economics of taxation, as relevant today as in 1920.

In the late 1920s my grand-aunt went to work for the League of Nations in Geneva, bringing my mother and grandmother to live with her. She was assigned to the double taxation unit, under American tax lawyer Mitchell Carroll, and he and my grand-aunt travelled around the world in 1932 and 1933 preparing a report on double taxation for the league’s fiscal committee.

Their research took them to a range of countries including what is now Indonesia, Japan, the United States and Cuba. Carroll’s subsequent report formed the basis for the League of Nations’ recommendations on the principles to be applied to international taxation, many of which still underpin the international tax code.

In a world of rising nationalism, dictatorships and growing protectionism, when the League of Nations itself was losing its role, it was surprising that so much was achieved in the field of international taxation. Maybe it was easier in a world that was deglobalising, where many countries no longer cared.

To avoid double taxation, one of the most important of the principles adopted arising from Carroll’s report was that companies should be taxed on their profits in their home country. This approach simplifies matters because, when a firm exports to a range of countries, it is very difficult to assign profits precisely by country where the firm produces or sells: there is no simple way of allocating to individual transactions the value of the intellectual property, or the cost of essential inputs such as marketing and accounting.

Inside Business with Ciaran Hancock · Apple Tax: inside Ireland's victory in landmark case

While this principle of taxing companies in their home country has survived largely intact over nearly 90 years, it may be time to introduce some alterations because of the changing nature of the world economy. Over recent years, the OECD has been considering this issue, though reaching agreement on how to modify the system is proving more difficult than for the 1930s League of Nations.

Digital businesses that are effective natural monopolies, the big tech companies that are household names, have exposed the weaknesses of the home country taxation model. One of the issues that really irks citizens across the European Union is that such massive multinationals pay little or no tax on the huge profits they make. The EU court ruling on Apple on Wednesday won’t soften such concerns. A finding of no sweetheart deal doesn’t take away from the reality of a tiny tax take.

Most of the digital giants are monopolies or near monopolies – Google and Facebook have few effective competitors. Many of them, such as Facebook, provide network services – allowing people to communicate with friends around the world. The benefits to users would be hugely diminished if they were broken up – competition is not a feasible answer for networks, whether digital, electricity or water.

If these monopolies operated in a single country the obvious answer would be to tax away their “excess” profits. However, finding a way of doing this with global companies, so that the countries where users live can share in the tax levied on the excess profits, is not easy to achieve.

Most of these firms are ultimately owned in the US, and their ability to avoid corporate taxation is primarily due to the US tax system. Most other countries, such as the UK, Germany and France, do not allow their companies to escape the tax net so easily. Ireland has managed to benefit from the interaction between the lacunae in the US tax system and our own low corporation tax rate, thus attracting some of the tax revenue that would normally accrue to the US.

This leaves Ireland vulnerable to a future US government taking a more rational approach, by taxing their own multinational companies effectively.

The OECD is attempting to solve this international tax conundrum, and Ireland is supporting these efforts. In chess it is often worthwhile to sacrifice a pawn to take a bishop. So, too, in international taxation, it would be sensible for Ireland to sacrifice some revenue, through supporting the OECD in reaching a workable solution on taxing the excess profits of large digital companies. The estimated cost to Ireland of a fair solution could well be €1 billion or more but it could be a small price to pay to assuage our friends’ concerns.