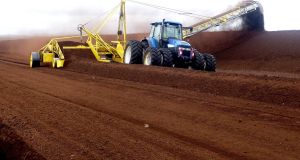 The Government continues to subsidise peat-fired electricity, which is one of the most ineffective and polluting ways of producing electricity. Photograph: Picasa

The Government’s climate credentials have again been called into question by new figures showing that as recently as 2016 it was still providing millions of euros in subsidies for fossil fuels, including the industrial extraction of peat for electricity generation.

The figures from the Central Statistics Office (CSO) show the Government provided €115 million in subsidies for peat-fired electricity in 2016 and just €88 million in environmental subsidies for the retrofitting of homes to make them more energy efficient.

The Government continues to subsidise peat-fired electricity, which is one of the most ineffective and polluting ways of producing electricity, through the Public Service Obligation (PSO) levy on electricity consumers.

Peat is burnt at Bord na Móna’s Edenderry power station and two ESB facilities in the Midlands, albeit the PSO subsidy stream for Edenderry expired in 2015, and is set to expire at the plants in West Offaly and Lough Ree in 2019.

While the Government’s new national development plan envisages a radical overhaul of how the State tackles climate change it only puts a 2030 deadline for the conversion of peat-burning power plants to more sustainable low-carbon technologies.

Environmental activists argue that most if not all the peat in Ireland will be harvested by then.

The CSO figures show that €772 million was provided in environmental subsidies for renewable energy projects, wastewater management schemes and biodiversity initiatives in 2016.

While this was 20 per cent higher than the amount provided in 2015 it was nearly 40 per cent lower than the €1.2 billion provided 10 years ago despite heightened global awareness around climate change.

“The most obviously absurd of these damaging subsidies is the €115 million that was spent in 2016 to promote the industrial extraction of peat to burn for power – something that generates just 9 per cent of our electricity but 23 per cent of the climate pollution from electricity,” Friends of the Earth director Oisín Coghlan said.

“Investing in energy saving is the biggest missed opportunity here as it lowers fuel bills and creates warmer homes as well as cutting pollution. By the State’s own figures we need to invest €2 billion a year from now to 2030 to upgrade homes,” he said.

“The figures show the Irish State still hasn’t got its priorities straight when it comes to tackling pollution and protecting climate and nature. These figures should be a key part of the discussion as the Government prepares for Budget 2019,” he said.

Mr Coghlan also noted that as recently as 2014 the State spent more taxpayers’ money on subsidies that risk environmental damage than prevent it.

The Department of Communications, Climate Action and Environment said: “Support for peat stations has taken place in Ireland as an important security of supply measure.”

“ Support for one of the three peat plants ceased in 2015 and support for the two remaining stations will end on December 31st 2019,” a spokesman said.

Ireland will be one of the few EU states to miss both its emissions and its renewable energy targets in 2020.

1 Money matters: ‘My father embarrassed us with his haggling’
2 Opioid executive admits to ‘no morals’ ahead of prison term
3 Pilita Clark: When a rude boss keeps you waiting, why not walk out?
4 Comcast acquires Irish cloud-based telco Blueface
5 US threatens retaliation against EU over proposed carbon tax
6 NI house builder apologises to Harry and Meghan over adverts
7 Explorer Petrel gets wider injunction to block sale of shares
8 Little strategic thinking in election manifestos of Fine Gael and Fianna Fáil
9 Are there annual limits on inheritances or gifts to a child?
10 South Dublin Credit Union members urged to borrow more to ensure survival
Real news has value SUBSCRIBE