Ireland’s contribution to EU budget expected to rise to €2.7bn this year

Figure may rise by an additional €400m after the UK departs, department warns 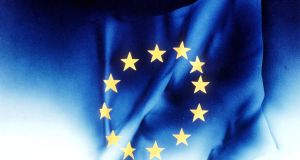 Ireland’s contribution to the EU budget is expected to rise to €2.7 billion this year, the Department of Finance has confirmed. This is 35 per cent higher than the €2 billion paid in 2017 and more than double what the State paid five years ago.

The department’s chief economist John McCarthy also warned this figure may rise by an additional €400 million a year as a result of the hole in the EU’s budget left from the UK’s departure, albeit this is subject to negotiation.

Mr Carthy was appearing before the Dáil’s Public Accounts Committee (Pac) along with other officials to discuss the department’s financial accounts for 2016.

He said Ireland’s EU contribution was not unduly impacted by the actions of multinationals, which tend to exaggerate official measures of national income.

“We would have a big difficulty if it was done on the basis of GDP,” Mr McCarthy said, noting GDP here has jumped more than 50 per cent in the past five years, largely because of the distorting impact of multinationals.

“Irish living standards are better assessed on a GNI basis. There is an issue with GDP overinflating living standards but in terms of the EU contribution it kind of works its way out,” he said.

In 2016, Ireland became a net contributor to the EU Budget for the first time since it joined the bloc in 1973 with the State paying in more than it received in grants and payments. The majority of Irish receipts, approximately two thirds, come in the form of direct payments to farmers.

1 Farmer seeks to challenge €3.6bn Intel plan in High Court
2 Who are Ireland’s 17 billionaires?
3 Council tells Johnny Ronan firm to keep the noise down at D4 Embassy venue
4 Ten of the most mysterious aircraft disappearances
5 Davos 2020: Worlds of Trump and Thunberg collide on a Swiss mountainside
6 Parties shred pension reform in pursuit of votes
7 Are there annual limits on inheritances or gifts to a child?
8 Cosgrave should give his speech to Web Summit’s partners in Saudi Arabia
9 Help, I’ve no PRSI stamps – can I still get a pension?
10 Auction politics: Can we afford to pay for the parties' election promises?
Real news has value SUBSCRIBE