Seen and heard: IDA paying US giants for jobs and consumer sentiment wavers 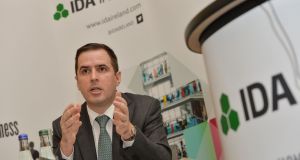 Martin Shanahan, chief executive IDA: Sunday Business Post reports more than three dozen grants of millions of euro were made by the government agency to foreign multinationals in return for jobs

More than three dozen grants of millions of euro were made by the IDA to foreign multinationals in return for jobs, the Sunday Business Post reports. The figures on what each firm has got emerged following the introduction of EU rules requiring all taxpayer subsidies of more than €500,000 to be disclosed.

The paper also reports on the steady repatriation of billions of euros from Ireland back to the US since president Trump unveiled sweeping reforms of the US tax regime. At the end of June $299 billion (€261.5 billion) of US treasuries were held in the Republic, down from $327 billion at the start of the year. The Republic was the third biggest holder of US treasuries after China and Japan.

A poll of consumer sentiment in the Sunday Independent shows 66 per cent believe the country is going in the right direction, only 30 per cent think the economy will improve next year. The paper reports people also intend to reduce expenditure on “big ticket” items and on going to restaurants and pubs.

Virgin Media has “tailed off” the rollout of its new fibre network around Ireland, citing high local authority charges, the Sunday Times reports.

Amazon has emerged as a bidder for a tranche of stores Homebase is looking to offload in the UK through a sweeping restructure of its business, reports the Sunday Telegraph.

French drugs giant Sanofi has warned that flu vaccine may have to be airlifted into Britain to prevent a winter crisis in the event of a no-deal Brexit. The Sunday Times reports that, given the last-minute production of such vaccines, the August truck supplies may be held up by delays at British ports if there is no deal.

Staying with Brexit, US car giant Ford has issued an ominous warning to UK politicians that it will do whatever it takes to protect its profits after blaming Brexit for a near- $1billion (€873 million) fall in 2017 earnings. The Mail on Sunday reports the firm, which employs 9,000 people in Britain, is also expecting to make a loss in Europe, including the UK, this year.

3 DCU rolls out e-scooter scheme on its campuses