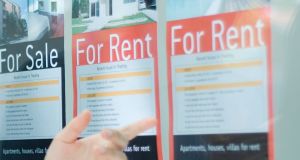 A new report has highlighted the chronic shortage of student housing in Dublin and other cities, while accusing the Government of “negligent inaction” on the issue. The study by property website Daft.ie suggests there were just 1,400 properties available to rent in Dublin at the beginning of August with a student population for the greater Dublin area of more than 80,000. It also found that average rents in the capital were now above €1,900 a month, well beyond the means of typical students, and were 13.4 per cent or €229 a month higher than they were just a year ago, and €500 higher than at the height of the boom.

Businessman Denis O’Brien’s Digicel has taken legal action seeking an additional ¤80 million from French telecoms giant Orange in relation to a long-running anti-competitive practices dispute in the Caribbean, The Irish Times has learned.

Aryzta is planning to invest 150 million Brazilian real (€33.8m) to build a fifth bread-making facility in Brazil, just as chief executive Kevin Toland is in the middle of a disposals programme in an effort to turn around the beleaguered Swiss-Irish food group.

Italy’s biggest toll-road operator came under heavy stock market attack on Thursday after Rome criticised it for a deadly bridge collapse this week, moving to revoke its concession and accusing it of failing to ensure the viaduct’s safety. Shares in Atlantia, the parent company, fell 22.3 per cent on Thursday.

Amazon. com is sounding out some of Europe’s top insurance companies to see if they would contribute products to a UK price comparison website in what would be a major foray by the US online retail giant into the region’s financial services.

Paddy Cosgrave found himself in a pickle this week after first inviting French far-right leader Marine Le Pen to address this November’s Web Summit, and then rescinding the invite. Mark Paul’s Caveat column reckons Cosgrave isn’t guilty of facilitating fascist views – it was just naivety. “But the episode also says much about the mortal dangers facing businesses that blithely wade into debates over social and political principles.”

Newry based StatSports has stuck sporting gold. The group is providing technology to 1,500 sports teams globally including premiership clubs and recent World Cup teams. Earlier this year scored a whopping £1 billion deal with the US Soccer Federation in what is believed to be the biggest contract ever signed in the elite sports wearables market. Charlie Taylor chatted to co-founder Sean O’Connor for the interview of the week.

This week’s Agenda feature considers what to make of billionaire Mike Ashley’s big plans for Sports Direct in Ireland and reckons the maverick businessman should probably be viewed as one of the most influential investors in Irish retail.

In this week’s economics column, Danny McCoy argues that the intangible asset resource boon of the past few years is overlaid on an Irish economy of true substance. “Our economy has never been at a higher watermark.” But he warns that what we are observing is a form of private affluence developing against a public infrastructure that is not keeping pace.