Turkey seeks to boost confidence in call with 6,000 investors 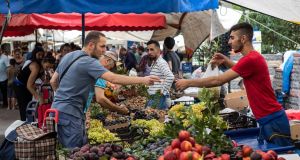 Turkey has set out plans to cut spending to bolster the lira as it seeks to navigate a way out of the crisis that has hit the currency and shaken emerging markets.

In a much-anticipated conference call with 6,000 investors, Berat Albayrak, the finance minister, indicated the country would largely use fiscal measures to slow down the economy and reduce a hefty current account deficit and inflation running at 16 per cent.

Mr Albayrak said the government would be asking ministries for expenditure cuts of 10-30 per cent, and that it would be aiming at a primary surplus of 6 billion Turkish lira (€0.9bn) for the rest of this year – which analysts suggested could be Turkey’s biggest fiscal tightening this century.

His comments, in which he also ruled out capital controls, boosted the lira, which rose 1 per cent against the dollar during the call. The currency was trading at 5.7274 Turkish lira during late afternoon trading, up almost 4 per cent on the day. This compares with a low of 7.2362 Turkish lira at the start of the week.

Mr Albayrak also said that Turkey was working on a “fiscal rule” to enshrine budgetary discipline in primary legislation.

One fund manager on the call said Mr Albayrak tried hard to reassure investors that Turkey was safe, the banking sector was sound and that recent volatility of the lira was not driven by fundamental factors.

“[There were] all the positive noises, but nothing we haven’t heard many times in the past,” the fund manager said.

“The first question was on capital controls; it should have given the government a pulse of the investors’ sentiments, and they should have heard the message loud and clear,” said Abhishek Kumar, lead EMD manager at State Street Global Advisors, who added he was reassured that no such plans were on the agenda.

Trump administration sanctions on two Turkish cabinet ministers over Ankara’s detention of a US pastor sharply accelerated the lira’s fall last week, as did increased US tariffs on imports of Turkish steel and aluminium.

The lira has since rallied for three days in a row as regulators clamped down on speculative selling. The currency is still down almost 15 per cent for August alone, with Turkey’s stock market and bonds also under pressure.

Mr Albayrak also said the country had made only “routine contacts” with the International Monetary Fund. Some analysts had speculated that Turkey would need to go to the IMF for assistance in order to steady its economy.

Ankara announced this week it had been promised $15 billion (€13.2 bn) in foreign direct investment from Qatar, but details have not been forthcoming.

Mr Albayrak stopped short of announcing other plans that strategists have said are critical in more permanently stabilising the economy. Analysts reckon it will take a sharp interest rate increase to stop the surge in inflation that is expected to be worsened by this year’s fall in the lira, but President Recep Tayyip Erdogan has long opposed high interest rates. – Copyright The Financial Times Limited 2018