Saving by Irish households jumps to over €5bn during lockdown 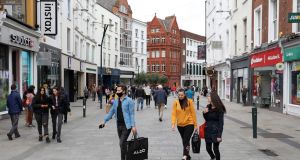 Irish households built up a stash of savings during the coronavirus lockdown, with Central Bank figures showing bank deposits jumped to €5.3 billion between April and the end of June. That compares with just €2 billion for the same quarter last year.

Restrictions to curtail the spread of the virus reduced consumer spending in the wider economy while the Government’s wage support schemes maintained income at or close to pre-Covid levels.

As a result some households have been able to save money they would have normally spent on areas such as childcare, transport and recreational activity.

Whether they hoard or spend these savings is likely to have a big impact on the speed of recovery. The Central Bank figures suggest deposits from households continued to grow in June, albeit at a slower pace than in the previous two months, when tougher restrictions were in place.

As a result, a number of tax incentives have been introduced to entice consumers to begin spending again in a bid to drive up demand in the economy.

The most significant is the reduction in the standard rate of VAT to 21 per cent from 23 per cent for a six-month period from September, which, if passed on to consumers, will reduce the cost of a range of goods and services.

Over the quarter, households repaid €407 million more than they drew down in their consumer and other loans. This contrasts with net drawdowns of €185 million during the same period last year.

In June, all sectors recorded notable month-on-month increases in spending, as Government restrictions continued to ease, the Central Bank said.

“The largest increases were recorded in the transport and accommodation subsectors, both of which experienced the largest declines in spending since the start of the pandemic,” it said.

In year-on-year terms, spending in the retail sector was strong in June, with a 40 per cent increase compared with June last year.

The value of ATM withdrawals followed a similar growth trajectory to retail card spending activity since its trough in mid-April, the figures showed.

1 ‘No demand... because there are no people’ at well-known Dublin pub
2 Buying a second home now that we work from home
3 HSE says fix for Covid Tracker app rolled out to all Android users
4 Nearly 30,000 could lose pandemic payment if they do not confirm eligibility
5 Face masks developed in Ireland could help meat-plant workers
6 UK criticised for ‘unforced errors’ on post-Brexit trade deals
7 Shelbourne Hotel operator Marriott posts bigger-than-expected loss
8 Bank of Ireland does U-turn after refusal to reimburse ‘smishing’ victims
9 ‘Saudi Arabia is where the opportunities will happen in future’
10 Science of selling crucial to post-Covid recovery
Real news has value SUBSCRIBE