Sad ‘stripper robots’, the other ‘Fire and Fury’ and a history of musical similarities 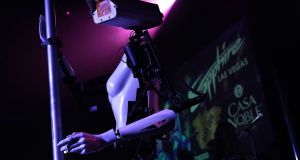 Image of the week: Stripper robot

It is with regret that we must confirm that while Planet Earth has had a good run, the human race has now entered its “stripper robot” period. Here one employed robot coyly approaches the pole of the Sapphire Las Vegas Gentlemen’s Club on the eve of the city’s Consumer Electronics Show (CES). This was just the warm-up: later pictures taken at the Sapphire were an orgy of robots grinding their moulded buttocks, sporting fake bank notes on their thighs and being mechanically submissive for battery cash in a manner that would totally confuse Johnny 5 of Short Circuit fame – were he to become a robot customer – and should also make most sentient carbon-based life forms feel very sad indeed. Las Vegas, 2019: the stripper robots form a union.

Percentage surge in shares of Eastman Kodak earlier this week after the film pioneers said they were launching a cryptocurrency called KodakCoin to help photographers manage income from their picture rights somehow.

Percentage spike in shares of soft drinks maker Long Island Iced Tea in December when it said it was rebranding as Long Blockchain Corp and shifting its business focus to blockchain technology.

Sum raised by various outfits through initial coin offerings (ICOs) in 2017. Kodak, which emerged from bankruptcy in 2013, has lined up its ICO for the end of January.

“Sunshine Saturday” is the name that some travel companies give to the first Saturday in January, one of the busiest days of the year in Europe for booking holidays. According to travel group TUI (the people responsible for the aurally challenging Ain’t Nobody ad), the first Saturday is the busiest day for bookings in the UK, while in Germany, the peak bookings day – last year, in any case – is the second Saturday. It’s not hard to explain the psychology behind the Sunshine Saturdays phenomenon: January is a grim, sparkle-free month and the only thing keeping some people going is the thought of escaping to a warm, bright future. Also, the airlines have sales on. “Bring on the sandcastles, buckets and beach balls,” enthused Aer Lingus, while Ryanair has opted for “Turn your Jan into a tan!”

Getting to know: Randall Hansen

Randall Hansen is a Canadian professor at the University of Toronto, specialising in migration, whose 2008 book has seen a unexpected spike in sales over the past week. Why? It was called Fire and Fury, and never mind that it boasted the subtitle “The Allied Bombing of Germany, 1942-1945”, this was enough for some book buyers to mistake it for Michael Wolff’s Fire and Fury: Inside the Trump White House, destined to be the publishing event of 2018. Hansen discovered – “incredibly” – last Friday that his decade-old book, about the morality of war, was rocketing up the Amazon charts. “Will I owe a larger royalty cheque to Bannon & Trump?” he wondered. “If so, the irony will know no limits.”

Radiohead says it isn’t suing Lana Del Rey over similarities between the verses of her album track Get Free and those of Radiohead’s Creep, but it is seeking songwriting credits “in favour of all writers of Creep”. It’s not the first time, and it won’t be the last, that an alignment of melodies has sparked the interest of lawyers.

3. Retro sounds: Elastica’s eponymous 1995 album was preceded by out-of-court settlements with musical predecessors Wire and The Stranglers over various riffs that were too close for legal comfort. The record remains one of the key peaks of Britpop.

4. Bad vibes: Robin Thicke and Pharrell Williams, co-author of Thicke’s dreadful 2013 hit Blurred Lines, were ruled to have infringed on the “vibe” of Got to Give It Up (1977) by Marvin Gaye after the family of the late soul singer took a case.

5. Copyright creep: Ironically, Radiohead’s Creep features co-writing credits for Albert Hammond and Mike Hazlewood, writers of The Hollies’ The Air That I Breathe, after they objected to a similar chord progression, meaning they could end up with credits on Lana Del Rey’s song too.

Precipitous revenue slump, Deliveroo goes convenient; and data protection fears 06:38
Why we should be slow to use tracking apps in coronavirus response 06:00
Change of plan: How businesses are learning to reassess and reinvent 06:00
Opening doors again far from easy for business 05:55
Ireland’s financial reputation: this time it is different 05:41

1 Lockdown exit: How can Irish economy reopen without big health risks?
2 I want to change my will quickly in case I fall ill. Do I need a lawyer?
3 Deliveroo branches into grocery deliveries in Ireland
4 Precipitous revenue slump, Deliveroo goes convenient; and data protection fears
5 Cold water poured on idea of ‘helicopter money’
6 Half of Irish SMEs expect revenue to fall by at least 60% in next three months
7 Finance ministers gather as fears grow even the future of the euro zone is at risk
8 Why we should be slow to use tracking apps in coronavirus response
9 Amazon cargo aircraft using Belfast airport for North’s online market
10 Opening doors again far from easy for business
Real news has value SUBSCRIBE