Department warns that corporation tax is a risk 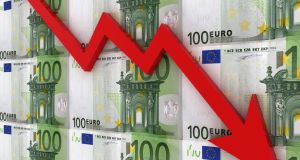 The report cautioned, however, that almost 40% of total revenue could be linked to just 10 companies. File photograph: Getty Images

A week after announcing a record annual tax take for the State, the Department of Finance has raised concerns about the future sustainability of Ireland’s €8 billion corporation tax income.

In a report on tax trends and their impact on the public finances, the department said revenue from the business tax had effectively doubled in the past three years amid a massive transfer of multinational assets here and increased corporate profitability generally.

The report cautioned, however, that nearly two-thirds of tax receipts came from a small number of firms paying in excess of €10 million annually and that almost 40 per cent of total revenue could be linked to just 10 companies.

“This highlights the potential exposure to idiosyncratic or form-specific shocks,” it said.

The department said both the rising share of corporation tax receipts within overall taxation –it now accounts for 16 per cent of total revenue – and the concentration of receipts within a small number of firms posed a significant risk to the public finances.

Amid the outcry over corporate tax avoidance internationally, social media giant Facebook recently announced it would no longer book global revenues generated in other countries through Ireland, a practice that saves it hundreds of millions of euro in tax annually.

A similar move by other digital giants, which use Ireland as an international tax base, could have big implications for the exchequer.

However, Minister for Finance Paschal Donohoe downplayed the likely impact of US tax reform on Ireland, noting the State’s corporate tax offering would remain competitive despite moves to cut the headline US rate to 21 per cent. “The proposition that we offer . . . will continue to be competitive, even against the context of changes being made in the US ,” he said.

The department’s report indicated that recovery in the labour market had the biggest impact on tax revenue here, lifting income tax receipts by 77 per cent to €20 billion in the past five years and that seven out of every 10 jobs lost during the crash had now been recovered.

Mr Donohoe said the Government may not spend all the money that will be available to it in the last budget of the confidence and supply deal with Fianna Fáil, which is due to expire after the next budget.

Under the confidence-and-supply arrangement Fianna Fáil supports the minority Fine Gael-led government, by abstaining on certain votes in the Dáil

It is expected that, under EU rules, Mr Donohoe will have €3 billion for tax rises and spending cuts in the October budget, but he said he may hold funds in reserve. He claimed the final budgets of Fianna Fáil governments before the economic crisis complied with EU rules at the time but still caused “huge” difficulties.

Fianna Fáil finance spokesman Michael McGrath said that while it was too early to make calls on the shape of budget 2019, more could be allocated to the so-called “rainy day fund”. Mr McGrath noted that former minister Michael Noonan had intended commit €1 billion to the fund in 2019, but Mr Donohoe had halved this to €500 million.