Irish house prices up 11.6% in year to November 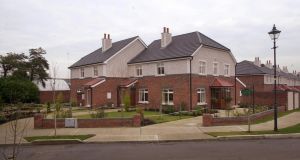 Property price growth moderated slightly in November, with prices advancing by 11.6 per cent year on year, compared to an annual increase of 12.1 per cent the previous month.

The latest numbers mean prices nationally have now risen by nearly 72 per cent since the trough in early 2013, and are just 23 per cent off their 2007 peak.

Annual price growth in Dublin, where supply pressures are most evident, was put at 11.3 per cent. The figures reveal prices in the capital have now risen by 88 per cent since the lwo-point of the crash, and are 24 per cent off their peak.

The highest house-price growth in Dublin was in south Dublin, at 13.3 per cent, and while the lowest growth was in Dún Laoghaire-Rathdown, house prices still advanced by a substantial 10.8 per cent.

Property prices in the Republic, excluding Dublin, were 11.7 per cent higher in the year to November.

Davy analyst Conall MacCoille described the 1.1 per cent rise in prices in November as “sharp”, suggesting the there was still no sign of the usual seasonal slowdown during the winter.

He also noted that house price inflation was now in double-digit territory across all regions except the mid-West.

However, he predicted house price growth would slow in 2018 as the Central Bank’s lending rules restricted the drawdown of mortages.

Merrion analyst Alan McQuaid said prices would only move one way in the short term because of the supply issue.

“Housing has now overtaken Health as the main political ‘hot potato’, and the key focus in Budget 2018 was on measures/initiatives that should help alleviate the problems going forward, but things won’t change overnight,” Mr McQuaid said.

“ One can argue until the cows come home as to the merits of the proposals announced, but at least the Government has taken a step in the right direction, with an acknowledgement that something dramatic needs to be done and sooner rather than later,” he said.