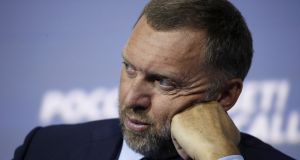 Russian aluminium giant Rusal on Friday warned of expeccted harm to its business from US sanctions, sending its shares down more than 7 per cent despite the company reporting a 20 per cent jump in first-quarter core profit.

The Russian firm owns the Aughinish Alumina plant in Limerick, which employs 450 staff.

The US sanctions and their likely impact on the Limerick facility has led to a flurry of activity at the highest political levels in Dublin and Brussels.

Washington last month announced sanctions on Russian billionaire Oleg Deripaska and several companies in which he is a large shareholder, including Rusal, En+ Group and GAZ Group, in response to what the United States said were Russia’s “malign activities”.

Though Rusal, the world’s biggest aluminium producer, said longer-term effects of the sanctions and the threat of additional future sanctions are difficult to determine, the company said it warned that the impact is highly likely to be “materially adverse”.

“In present circumstances, any forecast or outlook made or previously made should be deemed unreliable and may become irrelevant due to ongoing developments on the market at this period of time,” it said.

Rusal’s Hong Kong-listed shares were down 7.4 per cent earlier, reducing its market capitalisation to $4.2 billion, according to the ThomsonReuters data. The company has lost about 60 per cent of its value since the sanctions were announced on April 6th.

The company had earlier reported that adjusted earnings before interest, tax, depreciation and amortisation (EBITDA) rose 20.4 per cent year on year to $572 million in the three months to March 31 on revenue up 19.5 per cent at $2.7 billion.- Reuters