EU elbows, silver surges and the patience of a Brexit negotiator

Planet Business: Let’s not get going 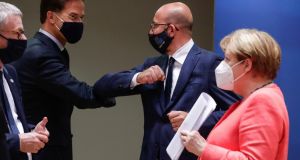 Image of the week: Summit bazooka

Fair play to Michéal Martin if he still wants to be Taoiseach after attending the second-longest EU summit in history. Falling just 25 minutes short of the EU enlargement get-together in Nice 20 years ago, the first face-to-face meeting of EU leaders since coronavirus involved 90 hours of talks in Brussels and culminated in a weary deal to provide €390 billion in grants to countries most hit by the pandemic and €360 billion in low-interest loans to other member states.

7 The price of silver hasn’t been so high in this many years, with spot prices surging amid industrial demand for the metal, as well as investor interest in safe havens.

9 The price of gold is at a nine-year high, though silver has outperformed it so far in July thanks to its use in batteries, semiconductors, solar panels and various industrial processes.

Getting to know: Olympia Ohanian

Olympia Ohanian, according to her Twitter account, is a “proud owner” of what is unofficially known as Angel City, a new Los Angeles women’s soccer team, which isn’t bad for a toddler.

It’s had to play tenth fiddle to a virus since March, but Brexit hasn’t gone away. Here are five of the latest thoughts on the subject. Warning: may trigger déjà vu.

1. Nothing to see here. Nobody should be at all alarmed that the UK government showed zero interest in whether Russia interfered in the referendum, says Boris Johnson. That’s just “the rage and fury of the remainer elite”, who should “move on”.

3. Any time is good. If no UK-EU deal is agreed before the end of the transition period, it will be “an enormous act of self-harm”, says Minister for Foreign Affairs Simon Coveney.

4. That pesky border. The UK’s international trade secretary Liz Truss has been expressing her concerns about its readiness for the end of transition, a pragmatism that is sure to see her reshuffled out of her job between now and December 31st.

5. Tough job: patience required. Michel Barnier, the EU’s chief negotiator, says his team will continue to talk to its London counterparts “with patience, respect and determination” despite “significant divergences”.

1 MSD buys Takeda biologics plant in Dunboyne
2 What will the office market look like after the great remote working experiment?
3 Facebook agrees Irish wind-farm deal with Brookfield in Tipperary
4 Data centres will force State to choose between climate and investment
5 ‘Saudi Arabia is where the opportunities will happen in future’
6 State’s biggest landlord records 30% rise in rental income
7 He’s almost 82 but Larry Goodman has plenty of moves left
8 Trump’s TikTok move may have far-reaching consequences
9 Scars from the crash give Irish banks 2.6 billion reasons for Covid caution
10 Project to identify spare intensive care beds accelerated by pandemic
Real news has value SUBSCRIBE