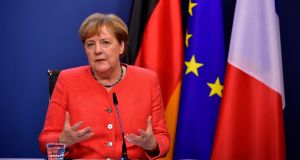 German chancellor Angela Merkel still l has a year to go in office but already the pangs of remorse are growing for the future of the EU without the experienced, drama-free German leader. Photograph: EPA/John Thys / Pool

After 90 hours of talks over four days in Brussels, Angela Merkel had no rest on her return to Berlin. First, her last-minute telephone diplomacy helped avert an escalating military standoff between Turkey and Greece over Ankara’s offshore gas mining ambitions.

Then, at 6.30pm, locals at a supermarket in central Berlin were amused to see the 66-year-old leader in her turquoise blazer, shopping for groceries.

As she shopped on Tuesday afternoon, the EU finance deal agreed at dawn in Brussels was attracting its first reviews from German politicians, economists and journalists: mixed at first, increasingly critical into the evening and, in some quarters, outright bleak by the following morning.

At the same time, many of even her most vocal German critics aired their grudging respect for the chancellor’s role in knocking heads together to avoid a collapse in the talks.

She still has a year to go in office but already the pangs of remorse are growing for the future of the EU without the experienced, drama-free German leader.

Three main components of the deal attracted the most attention – and criticism – in Germany.

First, Germany will be on the line for one seventh of the €750 billion loans/aid recovery package for countries hardest hit by Covid-19, primarily Italy and Spain. At the same time, as so-called “frugal” countries like Austria and the Netherlands secured additional rebates on their EU contributions, Germany’s annual contribution over the life of the new seven-year budget will rise by roughly a third to €40 billion.

This was EU diplomacy of the Helmut Kohl chequebook variety – securing an overall deal while keeping in tandem with France.

But German perceptions of the EU have changed significantly since the days of the late unity chancellor, and Merkel, his political protege, has yet to explain properly to Germans why she changed her attitude on EU-issued debt last March.

Joining forces with French president Emmanuel Macron is essential for keeping the EU’s Franco-German motor alive. But his claims after the summit, that the EU has entered a new era as a so-called “transfer union”, is grist to the mill of anti-EU German populists – and undermines Merkel’s insistence that this was a one-off rescue measure.

The deal secured by his group, he suggested, had shifted the centre of gravity in the EU away from the Franco-German partnership. By cutting €110 billion from the free Covid-19 stimulus fund, he suggested that Dutch prime minister Mark Rutte “as a liberal Dutchman is representing German interests and German insistence on rules much more strongly than the federal government”.

That chimed with the influential Bild tabloid: for weeks it has fumed over the German leader’s pivot away from her own frugal course. In a leader on Wednesday, it insisted the “historic deal requires a historic majority” in the Bundestag; not just a simple majority but two-thirds backing.

Another major point of concern was the declawed rule-of-law provision in the deal, which German critics fear has handed carte blanche to Poland and Hungary to continue their slide away from democratic checks and balances while cashing EU state aid cheques.

“For 10 years it’s been like this with Hungary and it’s getting worse and worse,” she said.

Germany’s two main daily newspapers were in rare, critical agreement on the deal. The conservative Frankfurter Allgemeine (FAZ) warned that the EU’s cracks, between differing political and budgetary cultures, are visible like never before.

The centre-left Süddeutsche Zeitung, though less allergic to transfers than the FAZ, sensed a new tone of “self-praise ... bitterness and blatant aggression” in a polarised EU of two camps: the “rule-of-law ignoramuses” and the “patronising” frugals, each blackmailing the EU in their own way to serve their own populist national agendas. Against this unpromising backdrop, he said, “the debate for the political form of a new EU will shift into the centre”.