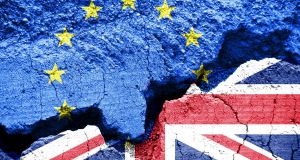 ESRI finds 22 per cent of Irish-owned firms rely on the UK for over 75 per cent of imports.

More than half of the imported materials used by Irish-owned firms to produce final products are sourced in the UK, according to a study by the Economic and Social Research Institute (ESRI), further underscoring the State’s exposure to Brexit.

The study, published in conjunction with the Department of Business, Enterprise and Innovation and Enterprise Ireland, highlighted food products as potentially the most exposed.

This is because firms here had a relatively high dependence on the UK market as an import source and because food products would incur the highest potential tariffs in the absence of a comprehensive trade agreement between the EU and the UK.

The ESRI report examined the extent to which exports of Irish firms use imports from the UK as part of their production process.

The study found that for Irish-owned firms, more than half of imports (56 per cent) from the UK were in intermediate inputs with another third being food products.

It found that 22 per cent of Irish-owned firms relied on the UK for over 75 per cent of imports.

Although they imported more, foreign firms were much less reliant on the UK as the source of their inputs, with 9 per cent relying on the UK for over 75 per cent of imports.

The goods that Irish firms are most likely to source from the UK were found to be from the minerals sector, which includes petrol and other fuels, and many products within the food sector.

The report also highlighted that imports of intermediate inputs plays an important role in the export performance of firms. “This suggests that restrictions following Brexit that result in increased input prices or availability could negatively affect firms’ broader export activities,” the ESRI report said.

However, it suggested the greater risk to firms’ exporting performance was likely to come from tariffs on goods they export to the UK.

The average tariff on the types of products imported from the UK as intermediate inputs would be 2 per cent in a hard Brexit scenario, it said.

However, food products are the primary export from Ireland, which would be subject to tariffs as high as 18 per cent in a hard Brexit scenario, the ESRI said.

The report’s author, Martina Lawless, said: “While the final Brexit outcome is still highly uncertain, an understanding of who is most exposed to any changes in trading arrangements is an important step in developing plans and policies to mitigate any negative impacts.”