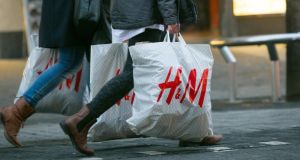 The survey suggests the typical Irish consumer is not seeing any marked improvement in their household finances. Photograph: Krisztian Bocsi/Bloomberg

Consumer confidence fell to its weakest level in 13 months in June on the back of increased global political uncertainty and higher costs.

The KBC Bank/ESRI Irish consumer sentiment index slipped to 102.1 from 106.7 a month earlier. This marks its poorest reading since May 2017.

While sentiment weakened during the month, the mood of Irish consumers remains broadly if guardedly positive.

KBC chief economist Austin Hughes said while the June reading suggested Irish consumers were being more cautious he added that they are still “modestly positive about their prospects.”

“The survey suggests the typical Irish consumer is not seeing any marked improvement in their household finances. So, spending growth is constrained. In addition, consumers were probably postponing purchases ahead of summer sales and their own holidays,” he added.