Policy likely to remain ‘appropriate’ with room for improvement in business investment, employment 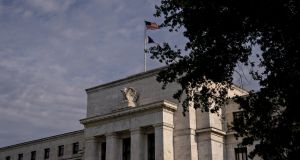 Federal Reserve building in Washington. According to Fed policymakers, risks to the outlook are ‘somewhat more favourable’ since their last meeting, in December. Photograph: Andrew Harrer/Bloomberg

US Federal Reserve policymakers discussed maintaining the Fed’s policy rate at 1.5 to 1.75 per cent “for a time” at their meeting at the end of January, to support both a recovery in business investment and a labour market with room still left to improve.

Risks to the outlook were “somewhat more favourable” since their last meeting, in December, they also agreed. According to the minutes of the January meeting, released on Wednesday, some even recommended letting inflation rise above the Fed’s target rate of 2 per cent “for a period”, to emphasise that they were just as willing to overshoot that target as undershoot it.

“Participants discussed how maintaining the current policy stance for a time could be helpful in supporting US economic activity and employment in the face of global developments that have been weighing on spending decisions,” the minutes read.

US stocks held on to earlier gains following the release of the minutes and the confirmation that the central bank seeks to stay the course with its present monetary policy stance.

The S&P 500 was up 0.6 per cent, while the Nasdaq Composite edged higher to 1 per cent. Meanwhile, US Treasuries held firm, with the yield on the two-year note steady at 1.4 per cent. The yield on the benchmark 10-year bond remained at 1.5 per cent.

While the Fed minutes confirmed that it wanted to stand pat on additional cuts for the time being it was also willing to adjust its stance as needed, said Guy LeBas, chief fixed income strategist at Janney Capital Management. “I don’t think policymakers have a need to cut rates now, however, the clear sense is that the next move will be lower,” he said.

Since December, the Fed’s Open Market Committee has made it clear that they intend to wait through the end of 2020 to make any policy changes, unless they see a material change in economic conditions or a dramatic increase in inflation. The committee brought on four new members in January; their internal deliberations show a Fed with a clear intent to continue to support economic growth.

The committee also took note of both the human toll and potential hit to growth from the spread of the virus Covid-19, and cited it as a risk to the outlook. Data on the consequences of that virus to both China and global growth have worsened considerably since the committee met on January 29.

For much of last year, the committee had worried about the steep decline in business investment, as companies waited out the trade war. At their meeting, Fed policymakers showed some confidence that investment would recover this year, with a preliminary trade deal between the US and China in place. Some Fed bank presidents said that sentiment of business owners in their own district was “brighter,” and that companies were intending to make capital purchases.

Several other people at the meeting judged that the effects of the trade deal would be “relatively limited,” as trade uncertainty would “remain elevated,” and disputes between the US and China could possibly re-escalate. Some noted that many firms were already shifting their supply chains away from China; others said that even as the environment for trade improved, financial conditions for farmers would still be “challenging”.

Many noted that US wages were only growing with inflation and productivity, and puzzled why wages weren’t growing faster, despite a historically low unemployment rate. They discussed several reasons – employees might be willing to forego raises in favour of more stability, for example, or companies might be improving benefits, rather than pay.

Several people at the meeting, however, “raised the possibility that there was some room for labour force participation to rise further”, a further sign that the committee is willing to wait for jobs data to get even better.

The committee also discussed the Fed’s interventions in capital markets to ease pressures on some short-term interest rates. They were broadly confident that reserves on the Fed’s balance sheet were approaching “durably ample levels”, but several people suggested that the Fed resume its discussion of continuing those interventions – even with reserves at an adequate level – with a more permanent solution, a so-called “standing repo facility”. – Copyright The Financial Times Limited 2020