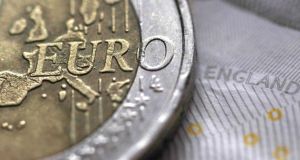 Prices across the Irish economy have most recently been held back by the Brexit-triggered decline in the value of sterling. Photograph: Phil Noble/Reuters

Services firms were able to increase the prices they charge at the fastest pace in three years last month as growth across the sector remained robust, a survey showed on Wednesday.

The subindex measuring prices charged jumped to 56.9 from 54.7 in October, the highest level since December 2015, while the main index fell back to 57.1 from 57.2 a month earlier, though it stayed well above the 50 mark that separates growth from contraction.

Inflation has remained broadly flat in Ireland since 2012 despite economic growth outstripping that of any other European Union member for each of the last four years, a period of equally unbroken growth for the services sector.

Prices across the economy have most recently been held back by the Brexit-triggered decline in the value of sterling against the euro that made the economy’s large proportion of British imports cheaper.

The rate of inflation has ticked up gradually this year and stood at 0.9 percent at the end of October. However the rate among services companies rose sharply in November, the IHS Markit Services Purchasing Managers’ Index (PMI) showed, with respondents putting the increase down to greater pricing power and not just a passing on of input price growth which moderated slightly to a six-month low.

“Combined with faster growth in manufacturing output, overall Irish private sector growth appears to be picking up as we head towards the end of the year,” said Amritpal Virdee, economist at IHS Markit. “Provided there is no external economic shock such as a hard Brexit, the Irish economy is well-placed for growth heading into 2019.”– Reuters