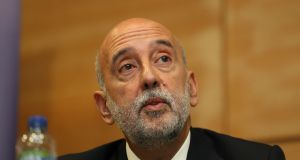 Gabriel Makhlouf: “There is a whammy from the pandemic that is hitting particular sectors hard and then we have the added whammy of Brexit.” Photograph: Nick Bradshaw

The Republic will be the euro zone’s biggest loser from a no-deal Brexit, which threatens to cause an economic “double whammy” on top of the fallout from rising coronavirus infections, the Central Bank governor has warned.

Gabriel Makhlouf told the Financial Times that if the UK left the EU without a trade deal at the end of this year, the new tariffs on goods would hit Ireland’s agricultural and food sectors hardest, knocking two percentage points off the country’s economic growth next year.

“This whole process is lose-lose,” said Mr Makhlouf. “People talk about who will be the winners from this, but I would argue that in the short term there will be no winners.”

However, in the longer term he predicted London’s dominant position in Europe’s financial services sector was likely to shift slowly to Dublin, Frankfurt, Paris or Amsterdam. “I think all of us would rather it carry on being London, but there is going to be change,” he said.

“I have found it fascinating how little debate there has been in the UK about the fact that this deal that is being negotiated doesn’t include financial services, which is such an important part of the UK economy, that employs lots of people and pays lots of taxes,” he said.

Speaking shortly after the UK and EU agreed to resume face-to-face talks on a potential trade deal, Mr Makhlouf acknowledged that the Irish central bank had recently changed its base case to assume there would not be a deal – describing such a scenario as a “double whammy”.

“There is a whammy from the pandemic that is hitting particular sectors hard and then we have the added whammy of Brexit and, if there is no deal, that’s a particularly big whammy,” he said.

The Government announced this week that it was closing all “non-essential” retailers and curtailing the hospitality sector for six weeks from Wednesday night to contain a rapid rise in coronavirus infections.

Mr Makhlouf said the tighter Level 5 restrictions would cause the economy to contract again in the final three months of this year. “There is a reasonable assumption that the six-week lockdown happens fairly regularly,” he said. “We’ll have to revise our models ... the fourth quarter is going to be negative.”

The UK accounts for about 10 per cent of Irish exports, but that rises to 38 per cent for agricultural and food products – and is even higher for beef. The Government has estimated a no-deal Brexit could put €1.35 billion – €1.5 billion of tariffs on exports to the UK.

Mr Makhlouf warned there would be wider costs for Irish society of an “acrimonious” Brexit in which the UK goes ahead with a draft bill to override crucial parts of the delicate compromise that it negotiated with the EU last year to avoid a hard Border – notably on sensitive points around state aid and export documentation.

But he said Brexit could make Ireland more attractive relative to the UK for businesses looking to establish a base for selling to the EU.

Earlier this month and before the latest restrictions, the Central Bank sharply upgraded its forecast for gross domestic product to shrink by “only” 0.4 per cent this year, compared with its previous outlook of minus 8.6 per cent. Mr Makhlouf said this reflected how Irish “pharmaceutical and chemicals exports have been incredibly resilient”, mainly at large multinational groups. Next year it expects GDP growth of 3.4 per cent, rising to 4.7 per cent in 2022.

The European Central Bank recently published a paper assessing research on the potential impact of a no-deal Brexit. It concluded that the UK would be hit much harder than the euro zone, which was likely to suffer a hit of 0.3 to 1.5 percentage points to GDP, with the Republic the hardest hit of the bloc’s members.

The ECB said EU exports of cars to the UK were expected to be hit with tariffs worth €5.3 billion – a big chunk of an estimated €16.1 billion of total tariffs on EU exports under a no-deal scenario. – Copyright The Financial Times Limited 2020