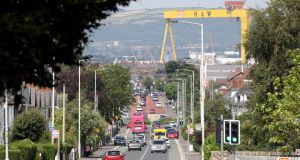 Salaries are rising faster in the North than anywhere else in the UK as a new survey shows the average pay packet in Northern Ireland increased 2.4 per cent over the past year.

Latest research from the recruitment group Hays shows average salaries across the UK rose 1.8 per cent.

According to the latest Hays UK Salary & Recruiting Trends 2020 report around 81 per cent of firms in Northern Ireland have found it difficult to find people with the skills they were looking for over the past 12 months.

The recruitment group said businesses in the North found it harder to recruit both permanent and temporary staff compared with firms in other parts of the UK.

A total of 937 Northern Ireland employers and recruitment candidates took part in the latest Hays survey, and 51 per cent of the participating firms warned that the skills gap was “negatively affecting productivity”, while a third (35 per cent) indicated that skills shortages were also having “a real impact” on their ability to deliver projects.

The Hays report highlights that pay remains a key factor for both employers and employees but 76 per cent of businesses that took part in the survey said they had increased salaries in the last 12 months.