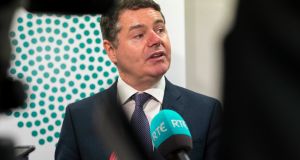 Minister for Finance Paschal Donohoe’s budget has been approved.

Paschal Donohoe’s budget has been given a clean bill of health by the European Commission in its annual assessment of member state budget plans.

The commission on Wednesday endorsed the recommendations of its services on euro countries’ draft budgetary plans, finding nine states (Germany, Ireland, Greece, Cyprus, Lithuania, Luxembourg, Malta, the Netherlands and Austria), fully compliant with the obligations for 2020 under the Stability and Growth Pact.

No draft budgetary plan was found in particularly serious non-compliance but, some gave rise to concerns. The commission sent letters to Finland, Belgium, France, Italy, Spain and Portugal, asking for further information.

The report on Ireland finds it compliant with the adjustment path towards the medium-term budgetary objective and with the debt reduction benchmark. It noted “limited progress” with implementing the fiscal-structural part of last year’s country-specific recommendations by the commission.

Overall, between 2019 and 2020, the number of member states at or above their medium-term budgetary objectives is estimated to increase from six to nine. The commission projects the euro area aggregate structural deficit to increase by 0.2 per cent of potential GDP in 2020 (to -1.1 per cent), thus showing a broadly neutral fiscal stance.

Since July this year and for the first time since 2002, no euro area member state is under the Excessive Deficit Procedure. The euro area debt-to-GDP ratio is expected to continue its declining path of recent years and to fall from about 86 per cent in 2019 to about 85 per cent in 2020. This is happening against the backdrop of a weakening European and world economy.

The commission projects that Italy will move further away from its medium-term budgetary objective in 2020. The same holds for Finland and Slovakia, but to a smaller extent and with both expected to maintain their debt-to-GDP ratios bellow 60 per cent.

In the case of Germany and the Netherlands, given their favourable budgetary situation, the Commission urges the authorities to undertake additional expenditures for supporting an upward trend in investment.

Speaking to journalists here, vice-president Valdis Dombrovskis, responsible for the Euro and Social Dialogue, also in charge of Financial Stability, Financial Services and Capital Markets Union, said: “With mounting risks weighing on Europe’s economic growth prospects, it is reassuring to see euro area countries like Germany and the Netherlands using fiscal space to support investment. However, there is scope for them to do more.

“On the other hand, member states with very high levels of debt – such as Belgium, France, Italy and Spain – should take advantage of the lower interest expenditure to reduce their debt. It should be their priority.”

The euro area’s growth outlook, while remaining positive, has weakened since the spring assessment round, and it is unlikely to rebound swiftly. According to the commission 2019 autumn forecast, published two weeks ago, aggregate real GDP growth in the euro area is expected to slow from 1.9 per cent in 2018 to 1.1 per cent in 2019, before rising only marginally to 1.2 per cent in 2020. This is broadly similar to the macroeconomic assumptions contained in the draft budgetary plans.