Pandemic triggers surge in saving with €12.6bn more on deposit this year 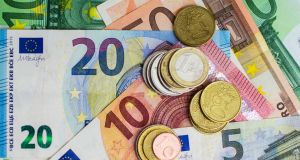 The surge in savings has been triggered by a combination of factors, including people putting off major purchases as a result of the Covid-19 crisis

Irish households put an additional €12.6 billion into bank and credit union accounts this year as savings soared during the pandemic.

Central Bank figures show that households here had a record €123 billion on deposit in October.

The surge in savings was triggered by a combination of factors, including people putting off major purchases as a result of the Covid-19 crisis; not being able to spend because of the restrictions’ and putting away money in anticipation of a recession.

Deposits from households recorded a net increase of €1.7 billion in the month of October, the Central Bank figures show.

In annual terms lodgements were €12.6 billion higher than withdrawals, the highest annual increase in household deposits observed since the series began, the regulator said.

“The pain of the financial crisis has taught people that credit is not an easy way towards improved living standards. Instead Irish consumers are likely to put an increased emphasis on having a larger financial cushion for a much more uncertain world,”

Separate Central Bank data on debit and credit spending shows a significant decline in transactions since the introduction of Level 5 restrictions to curb the spread of the virus in late October.

Total card spending, including ATM withdrawals, between October 22nd and November 23rd was 7 per cent below the daily average spending figure over the same period last year.

“Similar to the initial restrictions earlier in the year, card spending increased in the days prior to Level 5 restrictions being introduced in late October, with a subsequent decrease in card spending observed in the following days,” the Central Bank said.

However, it noted that card spending has not decreased as sharply as in mid-March, and has been “relatively stable” since the beginning of November.

More detailed data for October shows total card spending was €6.3 billion during the month, 2.1 per cent lower than September, and 3 per cent lower when compared to October last year.

The number of transactions with credit cards in October remained unchanged in comparison with September at 12.5 million.