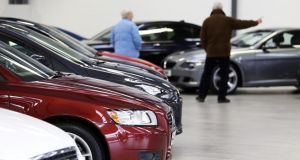 The consumer pulse has staged a rebound in recent months which continued in February.

More than one in three Irish consumers think now is a good time to buy “big ticket items”, with confidence in the economy up compared to this time last year following the UK’s orderly exit from the European Union.

The Bank of Ireland Economic Pulse, which combines the results of the consumer and business pulses, came in at 86.4 in February. The index was up 0.3 on last month but 4.4 lower than a year ago.

The surveys are conducted by Ipsos MRBI on behalf of Bank of Ireland with 1,000 households and approximately 2,000 businesses questioned on a range of topics including the economy, their finances, spending plans, and house price expectations.

The consumer pulse has staged a rebound in recent months which continued in February, coming in at 84. That was up 1.3 on last month’s reading and 2.9 higher than a year ago.

Bank of Ireland said households were “more positive about the economy”, while 35 per cent of people said now is a good time to buy big ticket items.

“Households – who appear to have put their concerns about Brexit on the back burner for the moment – were more upbeat about the economy’s prospects this month,” the bank said.

It also pointed out there had been more positive than negative responses in the survey for the first time since June. “While they were a tad gloomier about their own finances, the buying climate remained resilient,” it said.

The business pulse stood at 87 in February. While the headline reading was more or less flat on the month, the UK’s orderly departure from the EU saw firms upgrade their near-term expectations for business activity.

“Brexit is still a headwind for the economy of course, so it is not surprising that seven in 10 businesses expect their region to be negatively impacted over the coming year,” the bank said. “Though this is down from almost nine in 10 last September when fears of a no-deal exit were to the fore.”

While the UK left the EU on January 31st, a status quo transition period is in place until the end of the year. Firms upped their near-term expectations for business activity, and the survey pointed to general satisfaction with the basics like water, waste and energy.

However, they were underwhelmed by the telecommunications network, while transport and housing received a particularly poor score card from businesses.

Housing infrastructure was described as “sub-par” by many firms, with almost half rating it as “inadequate”. The housing pulse stood at 84.6 in February, up 6.3 on last month but down 15.2 on a year ago.

Having pared them back in January, households upped their expectations for future house-price gains. Firms in all regions called out housing as the priority area for investment in order to strengthen local economies.

“This month’s survey took place in the wake of the UK leaving the EU and in the midst of a general election at home,” she said.

“The former event passed off in an orderly manner, buttressing consumer and business confidence and allaying some concerns about the economic outlook.

“But with the general election delivering a hung Dáil, a period of domestic policy uncertainty lies ahead which may temper sentiment over the coming months.”