Tony Blair criticised after urging Brexit opponents to ‘rise up’

Former British prime minister Tony Blair says voters should be allowed to change their minds because they backed Brexit last year without knowing what Britain’s true terms of departure would be. Video: Reuters 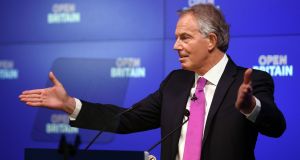 Conservative ministers and Brexit campaigners have rounded on Tony Blair after the former prime minister called on Britain’s pro-Europeans to “rise up” and seek to reverse the outcome of last year’s referendum.

Mr Blair called for a new, cross-party movement to oppose what he described as Theresa May’s strategy of “Brexit at any cost”, suggesting that his own Labour Party was not up to the job.

He said that voters should be allowed to change their minds because they backed Brexit last year without knowing what Britain’s true terms of departure would be. “As these terms become clear, it is their right to change their mind. Our mission is to persuade them to do so,” he said.

“What was unfortunately only dim in our sight before the referendum is now in plain sight. The road we’re going down is not simply hard Brexit. It is Brexit at any cost.”

Mr Blair said the question of whether Brexit should be reversed through a second referendum was a secondary one, arguing that the priority should be to persuade voters to think again.

Foreign secretary Boris Johnson accused the former prime minister of insulting the intelligence of the British people and showing contempt for the referendum vote.

He said pro-Europeans must persist in pointing out the cost of leaving the EU for British businesses and workers and for the country’s security. He said Brexit had brought Scottish independence back on the table and that negotiations over border arrangements were already destabilising the Northern Ireland peace process.

Mr Blair said the government was focused exclusively on the mechanics of Brexit, rendering it incapable of dealing with the complex diplomatic and economic challenges leaving the EU will present. He said this exclusive focus also meant that issues such as the National Health Service, education and the impact of innovative technology on the economy.

“This government has bandwidth only for one thing: Brexit. It is the waking thought, the daily grind, the meditation before sleep and the stuff of its dreams; or nightmares. It is obsessed with Brexit because it has to be,” he said.

He said pro-Europeans should not be intimidated by accusations that they are seeking to overturn the democratically expressed will of the people. The will of the people was not immutable, he said, but could change as circumstances change and more information becomes available. But he said the weakness of Labour under Jeremy Corbyn meant that opposition to the government’s plan for Brexit had to be more broadly based.

“The debilitation of the Labour party is the facilitator of Brexit. I hate to say that, but it is true,” he said.

“What this means is that we have to build a movement which stretches across party lines, and devise new ways of communication.”